US and China’s Historic Joint-Commitment on Climate Change

“China and the United States made common cause on Wednesday against the threat of climate change, staking out an ambitious joint plan to curb carbon emissions as a way to spur nations around the world to make their own cuts in greenhouse gases.

A climate deal between China and the United States, the world’s No. 1 and No. 2 carbon polluters, is viewed as essential to concluding a new global accord.”

The U.S.-China joint announcement of new commitments to combat climate change isn’t an agreement despite some press reports. It is a joint announcement. For the Chinese actual emissions commitments should be under the United Nations Framework on Climate Change (the UNFCCC). And the US isn’t looking for extra treaties to send to the Senate for ratification. Thus, another point is there isn’t anything here for Congress to act on, despite its criticism.

But this announcement is meaningful. China has now committed to bend the curve in its emissions, i.e. not just reduce their growth rate but reduce absolute emissions numbers. Models had suggested that ambitious new policies will be needed to do this by 2030, and that is what China committed to do.

The Chinese government lost no time in announcing new policies to help realize these goals. On November 19, the Chinese State Council announced a new Energy Strategic Plan for 2014 – 2020. Not only does the new plan reinforce clear goals for rapid development of renewable energy and natural gas (the least carbon intensive of the fossil fuels), but it sets clear consumption caps for both coal (the most polluting both in climate change and in local air pollution terms) and all fossil fuel. The coal cap is set at 4.2 billion metric tons in 2020 and the total for all fossil fuels at 4.8 billion metric tons. These total caps have been a major goal of the environmental movement, and setting a cap not just a couple of years out enables investors to see a clear trajectory for limitations.

Equally significantly, the US committed to not only current measures, but to add significant new measures in the future, looking at a long term trajectory of 83% emissions reductions from 2005 levels by 2050. The Obama administration’s success in bringing in higher auto efficiency standards and new commitments on power plants must have assured the Chinese that despite Congressional opposition, the US can deliver.

These efforts by the world’s number one and two emitters have breathed new life into the UNFCCC process, which has been trying to reach a new agreement by 2015. With this new announcement, the US and China join the already enthusiastic EU in pushing for a meaningful agreement, and together these powers account for 3/4s of total global emissions. Since the China announcement, President Obama also has pledged $3 billion for the Green Climate Fund, an important element of a global agreement for developing countries. This combination of significant action on domestic reductions and help for the developing world signals a level of engagement not seen from the United States since the 1990s. 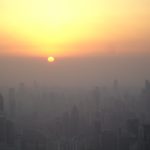 Change Is in the Air?Environment