One Belt, One Road, One Leader: Xi Jinping’s Environmental and Infrastructure Initiatives

The Expert Briefing is a special column dedicated to publishing the analysis and views of 21st Century China Center scholars on Chinese economy, politics, and society. This article is the second part of a special two-part article analyzing Xi Jinping's economic policies.

As we see the General Secretary using financial regulation for clear political benefits in the previous post, I will discuss a recent program of sending environmental inspection teams to every province, reproducing the pressure and some of the methods of the anti-corruption campaign.  I will conclude with some brief episodes that display new kinds of intrusive central policies, also closely associated with Xi, including the One Belt One Road initiative (or Belt and Road Initiative ), and the Xiong'an New District in Hebei.

During 2016 and 2017, every province has hosted a central government environmental inspection team. Initially piloted in early 2016 with Hebei, but gradually expanded to four successive waves (or batches ) that cover all provinces during 2017, environmental inspection teams have fanned out across the country. Each team spends about a month in each province, evaluating compliance with environmental policies and regulations. It sets up a citizen hot line for complaints about environmental problems. The explicit target of the team is the provincial leadership, both Communist Party and government officials.

This system replicates a key feature of the anti-corruption campaign, which included the dispatch of special inspection teams from the Central Disciplinary Inspection Commission (CDIC) to every province, major state-owned enterprises, and numerous universities and nonprofit organizations. These central government environmental inspection teams, in spite of their different policy objectives, bring a number of features from the earlier experience. First, each inspection team is headed by a current or recently retired ministerial official, so that they are of at least equal rank with the provincial party secretaries and governors who are the object of their oversight. Second, each group includes not only a vice-chair from the Ministry of Environmental Protection, but also officials from the CDIC and the Organization Department.[i] In other words, each inspection team brings the requisite central government manpower to give it clout.  The Organization Department official is there to make sure that the fulfillment of environmental objectives is in fact given serious weight in the provincial officials' career evaluation, so that economic objectives are not the only criteria being weighed. The CDIC official is there to ensure that violations of environmental rules or policy can be dealt with strictly.

In additi0n, the environmental inspection teams trace their policy lineage to a 2015 meeting of the Deepening Reform Leadership Small Group, the extraordinary party organization set up to foster Xi's economic reform agenda.[ii] The meeting, held July 1, explicitly laid out the principle that both Communist Party and government officials would be held accountable for both environmental and economic development objectives, and that supervisions would be strengthened. Whether that meeting explicitly advanced the ultimate design of the environmental inspection teams is not clear, but it certainly set in motion the gradual creation of a system of heightened central supervision. Thus, environmental policy enforcement now boasts an instrument of central control that is in turn linked to Xi Jinping's personal leadership and his effort to deliver on his policy promises, in this case environmental.

By all indications, the arrival of these teams in a province is a serious matter for the local leadership. The press reports thousands of officials held accountable in each wave of inspections, tens of thousands of remedial actions, and new environmental initiatives at the provincial level.[iii] Officials must scramble to show they are responsive and to rectify serious problems. A special subset of this enforcement effort is taking place with coal mine safety inspections (dangerous coal mines are often the most polluting as well). Inspection has been stepped up, provincial officials have been held personally accountable, and fines and punishments significantly increased.[iv]

The two foregoing cases ”financial regulation and environmental inspection teams ”could both be considered a Chinese model of regulation. That is, they impose stricter rules and closer enforcement, but are in principle compatible with a decentralized market economy. However, at the same time, the Xi Jinping administration is carrying out a series of policies that concentrate an increasing share of economic decision-making power in the hands of the state and the Communist Party. These are important policies with wide implications, and are only briefly mentioned here.

One Belt One Road (OBOR)

The Belt and Road Initiative,  the policy formerly known as One Belt, One Road, has taken on an explicit new meaning in 2017 as one of the few types of preferred external investment. This ambitious program supports Chinese-led and financed infrastructure construction in China's Asian neighbors.  In its earlier incarnations, the Belt and Road Initiative was a loose bundle of initiatives that met with the favor of the central government, and of Xi Jinping in particular. Before, it was possible to give nominal support to the initiative and do little, but now OBOR will draw resources from other types of potential outward investment. This is explicitly the case since the State Council issued binding guidelines on external investment on August 4, 2017.[v] Just to make sure there is no misunderstanding, the National Development and Reform Commission, the agency formerly known as the State Planning Commission, indicated it would give enhanced guidance to investments within the OBOR region.[vi] These actions clearly pull resources out of the market track and into a domain where government planners have an explicit voice.

The domestic analogue to OBOR is the Xiong'an New District in Hebei. Like OBOR, Xiong'an has Xi Jinping's fingerprints all over it. Indeed, Xi has personally identified with the entire program to restructure the entire Beijing-Tianjin-Hebei (Jing-Jin-Ji) region. Xiong'an New District is the jewel in the crown of the regional reconstruction program, a new city designed to display modernity, environmental friendliness, and seamless integration into knowledge and transportation networks.[vii] This ambitious program clearly draws investment resources into the state-planned municipality, leaning against the inclinations and wishes of current Beijing residents.

These programs provide resources and almost demand compliance from local government actors and businesses. As a result, they can also be effective instruments of political power. They enhance the power of the central government, and they enhance and display the power of Xi Jinping.

In terms of the immediate political impact for Xi and the 19th Party Congress, these economic initiatives help explain the manner in which Xi has been able to establish such personal political dominance. Xi has seized the initiative in many areas, and is far ahead of any potential rival for political power. He can punish opponents: the threat of charges or accusations on account of corruption, violation of financial regulatory norms, or environmental policy failures is serious. He can reward supporters: promotion and resources for central government programs are easily channeled to favorites. It is not just the obvious point that no politician could possibly challenge Xi for the top job. It is the more subtle point that challenging any of Xi's initiatives or arrangements could be very costly, and any Chinese politician will hesitate to do so.

Xi's objectives are political in another sense. They help him deliver on his promises, particularly those that resonate with the public. Environment is one area in which Xi has promised much; and while much has been done, the average Chinese citizen has yet to see evidence of improvements in air, water, and soil quality. Enhanced environmental compliance will certainly contribute to Xi's standing among the populace. The fact is that Xi will appear to the average Chinese citizen to be delivering on his promises for cleaner government, cleaner environment, and more regular financial procedures with less financial risk.

Xi's actions raise important questions from a systemic perspective. He is shifting the fundamental political economy of the Chinese system, making it more centralized, more top-down, and more personalized. He is developing new instruments to make this kind of centralized system work more effectively. These new instruments should be seen as an alternative to the independent regulatory institutions that are the norm in all other developed market economies. The system is drawing more resources into those areas of investment that are dominated by central policy decisions. The future success and stability of the system will depend on whether those investments can be used effectively and efficiently.

[i] Pengpai News Network, Revealing the secrets of the Central Environmental Inspection Groups; Ministerial cadres lead and the Discipline Inspection Commission participates, January 6, 2016; accessed at http://news.163.com/16/0106/07/BCKMH1IE00014AED.html. In several cases, the ministerial-rank officials actually held vice-ministerial jobs, but achieved personal ministerial rank on retirement through positions in the CPPCC and other entities. 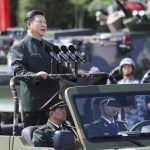 To Measure Xi Jinping’s Power, Look to the Provinces and the GarrisonsExpert Briefing