Even long-time China scholars familiar with Chinese regime politics and Hong Kong’s unique role as China’s conduit to the west failed to predict that the Chinese leadership would use Article 23 of the Hong Kong Basic Law to pass national security legislation of such broad jurisdiction. Not only does the new National Security Law apply to Hong Kong citizens, but it also affects foreign corporations in Hong Kong and foreigners. Regardless of where a perceived violation of the law takes place, the individual, group, or organization behind the alleged crime could be held liable. The National Security Law’s lack of transparency about the extent to which the law will be implemented has incited fear and uncertainty for Hongkongers and foreigners who may step foot into China in the future. The following account offers a fresh perspective often missed in Western media, concerning both the unfortunate outcome of Hong Kong violent protests—often encouraged by the United States and the United Kingdom—and the brewing animosity between Hongkongers and mainland Chinese that took root much earlier.

In response to the 2019 Extradition Bill, Hong Kong protests have persisted for months calling for its repeal, and evolving into a broader democracy movement, at times even advocating Hong Kong independence. This is my unpopular opinion: the small minority of protesters who engaged in destructive activities, and caused a senseless disruption of daily life and commerce in Hong Kong—such as vandalism of public transportation—did a great disservice to the cause of democracy. Prolonging such violence played into the hands of the Chinese central government to impose the National Security Law that we see today. Violent 2019 protester-police clashes further empowered the Chinese leadership to point out the Hong Kong government’s inability to sustain peace and security. Such violence created a window for Beijing to rationalize the necessity of stepping in to quash “terrorist activities, and collusion with a foreign country…to endanger national security.” The role that violent protesters unknowingly played in inducing the “end of One Country, Two Systems” rarely is acknowledged in western media. To counter political oppression, we need strategy, balance, and rationality no less than courage and determination.

Animosity between Hongkongers and Mainlanders

In January 2012, a spat that took place on a Hong Kong MTR subway train between thirty-year-old Hong Konger Ken Wai and a group of mainland Chinese visitors went viral online. A mainland Chinese girl eating noodles aboard the train sparked the quarrel, as Wai, along with other locals, rebuked her and the group for flouting regulations and eating on the metro. According to the law, eating or drinking on the MTR would result in a fine of 2,000 Hong Kong dollars. The argument intensified when the mainland visitors responded by making fun of Wai’s poorly spoken Mandarin, eventually requiring MTR staff to interfere.

Following this incident, Kong Qingdong, a professor of Chinese Studies at Peking University added fuel to the fire. In a webcast interview, he said, “Many Hong Kong people don’t think that they are Chinese. They claim that ‘we’ are Hongkongers, ‘you’ are Chinese. They are bastards. Those kinds of people used to be running dogs for the British colonialists…And until now, you [Hongkongers] are still dogs. You aren’t human.” Infamous for his use of profanities, Kong stands for the ultra-nationalist perspective of China and claims he is a descendant of Confucius. Kong Qingdong’s other controversial and widely publicized beliefs include the view that Hongkongers should be prohibited from speaking Cantonese or other local dialects, and forced to fully adopt Mandarin.

Subsequently, some Hongkongers retaliated with an “anti-locust campaign”: Mainlanders are nicknamed “locusts” because Hongkongers often perceive that they enter the SAR in massive influxes, crowding public places, exploiting healthcare, and capitalizing on other resources normally reserved for locals. Specifically, the demonstrators employed the derogatory term “double illegitimacy” to refer to children born in Hong Kong to parents both of illegal status. Note that this time the term locust is applied by one group of Chinese to another—not by Westerners, such as M. P. Shiels in his extreme, xenophobic book The Yellow Danger written in the 19th century, in which expressions like “a plague of locusts” and “a human worm” target Chinese as a race.

The narration of the acrimony between Hongkongers and mainlanders above serves to shed light on not only the prolonged protests in Hong Kong against the central government but also the larger question of why such a deep cultural chasm exists between different groups of Chinese people.

The Western media has portrayed the Hong Kong protests primarily in political terms, as a fight for freedom and democracy, without paying sufficient attention to their underlying emotional, historical, and cultural dimensions. Research conducted by my colleagues and I confirms that political choice or behavior depends on not only ideological positions (preferences), but also the emotional intensity with which they are held.

The data we gathered some 2 years before Hong Kong’s handover from British to Chinese control in 1997 showed that Hongkongers had medium-to-strong levels of identification with Hong Kong. They appeared to take pride in their identity as members of Hong Kong society. The majority identified themselves solely or primarily as Hongkongers rather than as Chinese.

The respondents perceived Hong Kong as weak politically, though very strong economically, in relation to China. They had the tendency to distrust mainlanders, and preferred to maintain a marked distinction between themselves and mainlanders. However, the respondents had a strong sense of pride in being both Hongkongers and Chinese, and especially felt responsibility towards both Hong Kong and China. Taken together, the data suggest that, despite their antipathy towards mainlanders, Hongkongers to an extent remain anchored in their historical and cultural Chinese roots.

Later surveys conducted by the Public Opinion Programme (POP) at the University of Hong Kong have also found, quite consistently, that only a small minority of Hongkongers identify themselves as Chinese. Founded in 1991, POP regularly published polls on sensitive political issues that are deemed as unfavorable to the “One Country, Two Systems” status. Not surprisingly, it has come under pressure from pro-Beijing critics. On June 30, 2019, POP ceased to be a part of the university, and now operates as an independent body. This outcome raises deep concerns about academic freedom in Hong Kong.

Why is the mutual animosity so entrenched and intense?

Fundamental linguistic differences between Cantonese, the primary language spoken in Hong Kong, and Mandarin, China’s official language, reinforce the division seen between mainlanders and Hongkongers. Cantonese, considered a dialect by some and a language by others, and Mandarin are overall mutually unintelligible. Language inspires culture, and vice versa. For instance, much of Hong Kong slang cannot be written using conventional Chinese characters; slang makes up daily life and pop culture in Hong Kong, and the fact that mainlanders and Hongkongers have such contrasting linguistic expression causes the cultures to diverge.

The clash of political cultures is certainly one of the factors contributing to the animosity between Hongkongers and mainlanders. Significant divergences in political culture have arisen from Hong Kong and China’s different historical experiences for over a century, concerning the role of government, legal institutions, freedom of the press, and so forth. Many Hong Kong residents are refugees who have fled from starvation or political oppression in the mainland, and are naturally ill-disposed to the central government.

Mainlanders may envy the greater political, financial, and economic freedoms that Hongkongers enjoy under the “One Country, Two Systems” structure. The Chinese central government also has reasons to be vigilant against “spiritual pollution” and “liberalization” spreading from Hong Kong to the mainland, especially in Guangdong province.

Economic disparity, especially during the last hundred years, is a much stronger factor that contributes to the mutual dislike. Many Hongkongers think of China as backward and treat mainlanders with disdain. With the exponential increase in mainland Chinese tourists and consumers to Hong Kong, locals commonly gripe about mainlanders engaging in intrusive behavior such as cutting in line, speaking loudly, not respecting personal space, and hauling large suitcases around shopping malls to transport bulk purchases. Aggregating these negative experiences with mainland visitors, negative stereotypes gradually have been built into Hongkongers’ collective impression.

In return, mainlanders resent the arrogance of their Hong Kong compatriots. On a visit to the mainland, I saw Hongkongers flaunting their wealth in a restaurant; no sooner had they left, than a waitress spoke to her fellow workers, loud enough that I—as an easily identifiable Hongkonger—could hear, “I hate these Hong Kong people! They feel so superior because they have money.” Adding to such mutual repulsion are the widespread practice of Hong Kong businessmen having mainland mistresses, and of mainland women earning a living as prostitutes in Hong Kong. Economic disparity, in short, debased the intergroup relations. Hong Kong presents an interesting phenomenon, where a Chinese person often receives worse treatment from the local population than a foreigner.

Distrust begets distrust. This describes the tragic situation of Hong Kong on two levels: one between two Chinese peoples, Hongkongers and mainlanders; and the other between two superpowers, the U.S. and China. As we inch away from diplomatic solutions at the individual and country levels, how will Hong Kong see a fate other than chaos and self-destruction?

Dr. David Y. F. Ho is a retired professor of Hong Kong University (HKU). He was the pioneer psychologist who introduced clinical psychology into Hong Kong, and has held professorial appointments in psychology and the humanities in Asia and North America. Dr. Ho was also the first Asian to have served as President of the International Council of Psychologists. 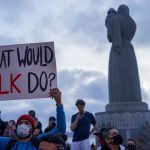 A Chinese International Student’s Perspective on the #BLM MovementSociety & Culture 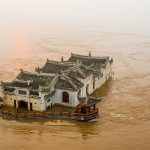