Do I Stay or Do I Go Now? Hong Kongers Grapple with Mainland Assimilation

Six years ago, my family achieved the holy grail of the middle class of Hong Kong: purchasing an apartment. My father, an engineer who had spent the last decade helming projects in mainland China, had saved meticulously for this moment his whole adult life; after exhaustively researching the property, he finally pulled the trigger and bought an 800 square-foot apartment. Fifteen minutes away from Hong Kong International Airport in one direction and 15 minutes away from Hong Kong Disneyland in the other. In the six years since, my father’s belief in the principle of “location, location, location” has so far paid off handsomely, as the area surrounding the property has seen significant investment due to the influx of tourists from mainland China. An outlet mall was built right outside our apartment complex with a direct bus loop from Shenzhen to the mall which busses in hundreds of Chinese tourists daily. As of 2014, the value of the property was almost double what he had paid for it in 2008.

So I was caught off guard when, during my last visit home, my father had something to show me. With plans for retirement finalized in his head, he rolled out floor plans and brochures for new apartments that he was looking into purchasing. He poured over the pros and cons of each on and asked for my input on his preferred options. I couldn’t help but notice that all of the properties were in Canada or the US; none were in Hong Kong. When I asked him if this meant he planned to leave Hong Kong and sell our existing apartment there, he was noncommittal. “Hong Kong is changing,” he explained. “Our house value has never been my top concern. My concern is that quality of life in Hong Kong as a whole is not going to get better.”

According to the most recent polling by the University of Hong Kong, my father is not alone in deciding that a favorable economic situation isn’t enough to justify staying. Hong Kong, the eclectic international city of Western governance fused with Chinese culture and values, has long been a place which enjoys the best of both worlds. Most observers assumed that Beijing would grant universal suffrage to Hong Kong in 2017 as part of the handover agreement which returned Hong Kong to Chinese rule, but Beijing’s perceived about-face on the nomination process for Hong Kong’s next Chief Executive alarmed many in the city. Ever since the student-driven “Umbrella Movement” protests came and went in the fall of 2014, talk of “giving up on Hong Kong“ has become more vociferous in the news media as the pro-democracy protests themselves died out. All this is going on amid statements from Hong Kong’s political leadership indicating that they expected more protests in the near future due to there being no chance that the demands of pro-democracy protesters will be met (such as public nomination for the next Chief Executive, dialogue over the Basic Law, etc.).

The threat of capital flight out of Hong Kong and the increased antagonism towards mainlanders in the city are symptoms of Hong Kong’s mounting discontent from the the pervasive perception that becoming “just another city in China” is the equivalent of accepting a huge drop in quality of life.

In addition to the rifts opened in the wake of the Umbrella Movement protests, the issue of so-called “Parallel Traders“ and tourists pouring from mainland China into Hong Kong has become a symbol of Hong Kong’s hopelessness regarding quality of life in the city. While tourism only comprises 3.9 to 5 percent of Hong Kong’s annual GDP, the perceived negative effects of mainland tourism on Hong Kong society (such as mainlanders buying out basic necessities and disrespecting Hong Kong laws and social norms) have moved to the forefront. Perhaps the biggest complaint with mainlanders in Hong Kong centers on housing. Wealthy mainlanders that purchase property in Hong Kong as investments and not to live in are increasingly blamed for the city’s crushing Housing Affordability Ratio and lowest quality of life ratio in a decade. Amid mixed signals from officials in Hong Kong and Beijing regarding a potential cap on mainlanders allowed into Hong Kong, Hong Kongers have started lashing out at tourists from mainland China in acts of protest and aggression despite the increasing importance of mainland tourists to the city’s service industries and job market. These acts would have been almost unthinkable in generations past, but they represent the boiling frustration that certain segments of the population feel over the Hong Kong government’s inability to safeguard its unique way of life post-handover.

An example of this is the perceived threats towards Hong Kong’s judiciary system. Hong Kong has long been admired for its independent judiciary, a pillar of what makes the city an attractive environment for international businesses. Hong Kong’s judicial establishment was already under pressure even prior to the Umbrella Movement protests, but a post-protest row between Secretary for Justice Rimsky Yuen Kwok-keung and the judicial establishment in the city have made things more uncertain. These developments have led to questions about whether the Hong Kong government is more interested in defending the judiciary or co-opting it towards a more pro-Beijing composition. “Hong Kong’s distinctive advantage is its independent judiciary”, says Susan Shirk, the chair of the 21st Century China Program and Ho Miu Lam Professor of China and Pacific Relations at the School of International Relations and Pacific Studies (IR/PS) at UC San Diego. “If businesses anticipate that it won’t last, why not relocate to Singapore, or even Shanghai?”

I see this effect within my own cohort of friends living in Hong Kong. I was in close contact with many of them through social media during the Umbrella Movement protests last year; while I had friends who broke sharply to both sides of the ideological divide due to their professions, the majority found themselves torn between acceptance of Hong Kong’s lack of sovereignty, yet still hopeful that a compromised could be reached with dialogue. At first there was passion, then cautious optimism as the political players angled for common ground. Today, when I ask my friends about the protests against mainland tourists and the general atmosphere in Hong Kong, I sense skepticism that the government of Hong Kong holds any real authority or that the public opinion of Hong Kong residents has any effect on policy and governance. Some spoke of continuing their education in Australia, Canada, or elsewhere. Others are considering business opportunities in Singapore or the United Kingdom. Almost all of them, relatively affluent and international-school educated 20-somethings without strong opinions on issues such as democracy or suffrage, spoke of leaving in the near future.

But what about those who don’t have the option of leaving? The frustrations of those without an escape route are the driving force behind the current backlash against mainland tourists. As a city that has grown to be a unique economic and cultural powerhouse over the last half-century but has never enjoyed universal suffrage, Hong Kong now finds itself in an unenviable position where the circumstances which allowed generations past to succeed seem to be rapidly evaporating. The polarization of Hong Kong society on the issues of mainland tourism, universal suffrage, and the existential question of what it means to “be Chinese” means may have forever transformed the city’s self-image. Should the agenda for “Moral and National Education“ be enacted in Hong Kong, those views may be subversively altered for future generations. The assurance that Hong Kong could preserve its non-authoritarian government and way of life as part of its “Special Administrative Region” designation within China has been shattered by Beijing’s reinterpretation of what universal suffrage means for Hong Kong.

The threat of capital flight out of Hong Kong and the increased antagonism towards mainlanders in the city are symptoms of Hong Kong’s mounting discontent from the the pervasive perception that becoming “just another city in China” is the equivalent of accepting a huge drop in quality of life. Guangzhou-born Cantopop star Hins Cheung (张敬轩) stated in an interview with HK Magazine that, “mainlanders like Hong Kong because there are so many successful people here. You can easily imagine becoming one of them someday. That’s what makes Hong Kong so charming.” But what if those same successful people are leaving because they don’t want to live in a city that resembles mainland China? Unless the Hong Kong government wants more Umbrella-esque protests in the future and the flight of its most affluent citizens, it will have to convince Hong Kongers that a more tightly-entwined future with mainland China beyond just the economic sphere isn’t as bleak of a prospect as it seems today.

Steve Kwan is an IR/PS MIA student majoring in international politics with a regional focus on China. Steve grew up in Hong Kong and received his BA in Journalism from Penn State University. 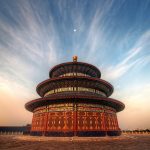 Religion and the Chinese State in Conversation: Interview with Xinping ZhuoSociety & Culture 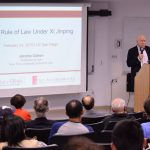