The UC San Diego School of International Relations and Pacific Studies (soon to be School of Global Policy and Strategy) and the 21st Century China Program are host to some of the world’s leading China scholars. In this column, we sit down with these experts and ask them three questions related to their field of expertise.

Dr. Joseph Fewsmith is Professor of International Relations and Political Science at the Pardee School of Global Studies at Boston University. He is the author or editor of eight books and numerous articles, including, most recently, The Logic and Limits of Political Reform in China (2013). He is a regular contributor to the China Leadership Monitor.

1a) In your past work you’ve commented on how Tiananmen marks a major turning point for intellectual and political trends in China. Do you think that Xi Jinping’s rise marks another such turning point?

Well it’s a different type of turning point, but yes I think it’s absolutely huge. Obviously the full dimensions of this is something that we will see unfolding over the next few years, but in my interpretation there was a very broad recognition in the political elite that China faced enormous problems, a real crisis. Both domestically, as reflected in rising mass incidents, and internationally. I think you see a large number of articles reflecting regime and particularly Xi Jinping’s thinking that the Chinese Communist Party could go down the former Soviet Union. And that signals to me, and I have to do more systematic work on this, but I think that it is a pretty clear signal that the regime felt that it was in trouble. I’m very hesitant in going out this way, but I think that there was a princeling critique of what was going on. I use the word princeling very advisedly because I don’t think that all princelings get along with each other or agree with each other. They compete with each other just like any other group, but within a select group, obviously the relationship between Wang Qishan and Xi Jinping is absolutely key. You mentioned Liu Yuan, I think he’s a key member of the group. Liu Yazhou seems to be another member of the group. At any case, these people seem to have known each other for a long time and agree that if something major is not done the regime will collapse. And so I think that the anti-corruption campaign, even the curbs on ideology, it’s all about bringing back discipline to the party and to society. So yes I think this marks another really huge turn.

1b) But the impact it seems like you describe so far focuses really on what’s happening within the elites. But after Tiananmen there was a market shift up and down society. So what does this reorganizing at the elite level mean for the masses?

Are you asking about popularity?

1c) Well after Tiananmen there was centrally a new bargain that arises, it’s not about ideology or about political reform, we’re just going to get rich. But now, what is that deal? What is that compact with the masses?

I think that’s a very good question. In fact, as you know, the economy has been slowing, and perhaps even because of the anticorruption campaign. Local officials seem to be much more cautious about investment, about requisitioning land. At least my friends tell me that mass incidents are actually down, but they’re down because there’s not so much requisitioning of land. That also suggests that there will be a backlog, that in a year or two you’re going to see more requisitioning. I think that that’s what the whole rule of law initiative is about. This is not about building law, but it is about trying to enforce law equitably across society. So I think that’s part of the new-new deal: we will arrest those who are guilty and not others, and justice will be administered more fairly. Whether it will be, I mean, this is very, very difficult to do. So that’s something to see.

2a) What are your thoughts on the logic and limits of political reform?

There is no political reform, so the limits are very real. That’s what concerns me a great deal about China right now. What I was looking at in that book, were some very interesting experiments with limited elections at the township level and now those have almost completely stopped. And Xi Jinping has been quite clear that we don’t necessarily want to promote cadres by vote. So we don’t trust that mechanism, so you’re back to the Bole, the spotting the good horse, right? The trouble is if Xi’s vision of how to run China doesn’t work, you have no off-ramps. There’s not sort of a turning back to a more pluralistic, open, democratic in some sense of the word, China. At least now it looks like it’s succeed or fail, that you don’t have these other options.

2b) I guess I want to push back a little bit against that. In Frank Fukuyama’s new book, Political Order and Political Decay, he identifies rule of law and representation as separate pillars in what modern government looks like. It seems like the Party is investing a lot in building rule of law, as you previously mentioned. If they succeed in this dimension, is it still political reform in some way, even though there’s no increase in pluralism and representation?

Can China really go the Singapore model? I’ve always been skeptical of that because China is just so many times larger than Singapore. You can do this in a society of now 6 million, but when they built the model maybe 3 million. The political elite all knew each other and all that. Can China really do that? Lee Kuan Yew comes out of an English barrister tradition, a very different sense of what law is. If they can do that, maybe. But I have to say I’m very skeptical that they can do that.

3a) How do you interpret China’s foreign policy and diplomacy under Xi Jinping? A little change of direction. . .

The more assertive Chinese foreign policy, which actually started under Hu Jintao, raises a lot of questions because most of us view Hu Jintao as a very weak leader. Were other people, whether it’s the military, or whether with Xi Jinping before he ascended to the top position, were other people responsible for setting some of these parameters? I think there’s a lot we don’t know about that turn in Chinese foreign policy around the global financial crisis, ‘08 to ‘09 that period. I have viewed a certain degree of tension, particularly in Asia, as actually good for Xi Jinping. Leads to patriotism, rally around the flag effect, centralization of power. If you’re going to carry out, as is now happening, a reorganization of the military, “Be prepared to fight and win conflict” is his slogan. “Look, we’ve got tension out there guys, this is why I’m doing what I’m doing.” So I think it gives him leverage. It’s also hard for me to imagine going hard on corruption domestically and being soft externally. I think there’s a political logic that you have to be tough on both sides.

3b) That’s absolutely right. The strategic outlook that was released last year, compared to the American national security strategy, has a much darker view of the world in terms of the threats that are looming out there. But the other aspect with Xi that a lot people have commented on that differs from Hu is not just in the assertiveness but also in how much more active his diplomacy has been. He’s traveled to many more countries, built visible partnerships, he’s trying to build institutions. Are these complementary strategies with a growing geopolitical assertiveness? How do interpret these things?

You’re getting into areas which I don’t follow as closely, but yeah I think Xi has been very active and I think he has a global strategy. He’s very well aware of the importance of investments in Africa, Latin America, you have the New Silk Road, the maritime.

One road one belt.

One road one belt, that’s right. I’m not sure these are products of a strategy, I’m not sure how well thought out that strategy is, we’ll find out over time. But yeah, I think he’s extremely active in terms of foreign policy. So yes, I would say that those are complementary. It’s an assertion of China’s role at least in Asia and eventually in the world.

This interview was conducted by Jack Zhang at IGCC’s Quantitative Studies of the Chinese Elite Conference on February 7, 2015. 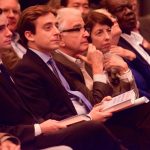 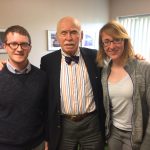 Sit-down with the Godfather of Law in China: Jerome Cohen InterviewInterview