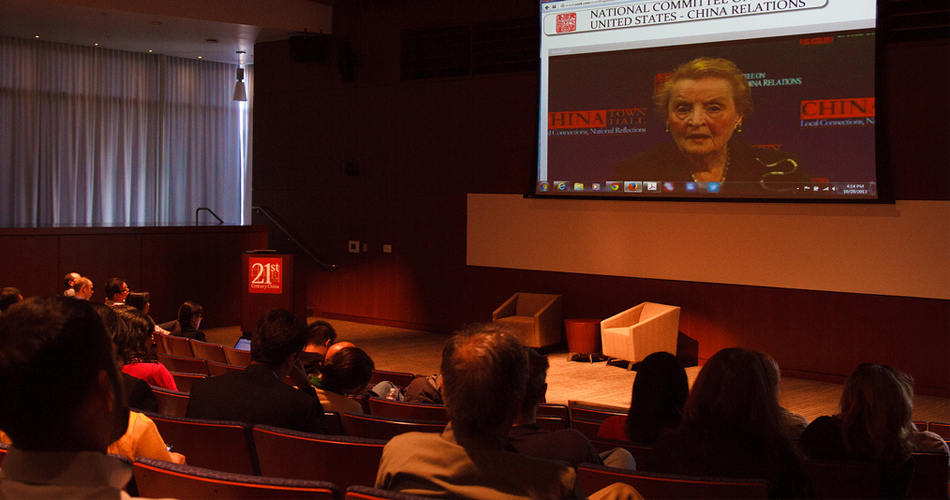 Former Secretary Albright stated that the United States should not fear China’s presence in Latin America, as the U.S. wants China to play an active role in the global community and more specifically in global security issues.

The event opened with a live webcast featuring former Secretary of State Madeleine Albright. The discussion was dominated by questions submitted by viewers. Among the topics were China’s growing income gap, welcoming China’s FDI into the United States, and China’s presents in Latin America. Former Secretary Albright stated that the United States should not fear China’s presence in Latin America, as the U.S. wants China to play an active role in the global community and more specifically in global security issues. China has mostly focused on expanding trade in Latin America, especially to satiate its growing need for natural resources. However, there have been efforts to expand China’s cultural influence in Latin America as well, such as opening 32 new Confucius Institutes all over the continent. Secretary Albright also explored the primary difference between the U.S. and China’s cyber-espionage programs. The U.S. cyber program focuses solely on the traditional arenas of security and politics, while China’s program veers from convention to instead seek economic advantages by hacking into the networks of private corporations.

After the video chat with Secretary Albright, the event transitioned into a lecture given by Professor Jeremy Wallace of Ohio State University on China’s Urbanization. The talk discussed China’s hukou system as a means to combat uncontrolled urbanization and the CCP’s attempts to move away from an urban bias. According to Professor Wallace, one of the Chinese government’s greatest challenges is the growth of megacities and slums in China. The government establishment believes unfettered urban growth could lead to Arab Spring-like uprisings and public protests. Thus, China has abolished agricultural taxes and begun rural subsidies to discourage urban migration. Professor Wallace also discussed the turning point China faces as its population demographic shifts and the surplus of working-age factory laborers diminishes. China has learned since the Financial Crisis that it cannot rely on the world’s markets for export-led growth, but it has yet to fully develop its consumer base to pick up the slack of stagnating global demand. Professor Wallace’s eloquent presentation served as the perfect conclusion to a phenomenal night of China discourse. 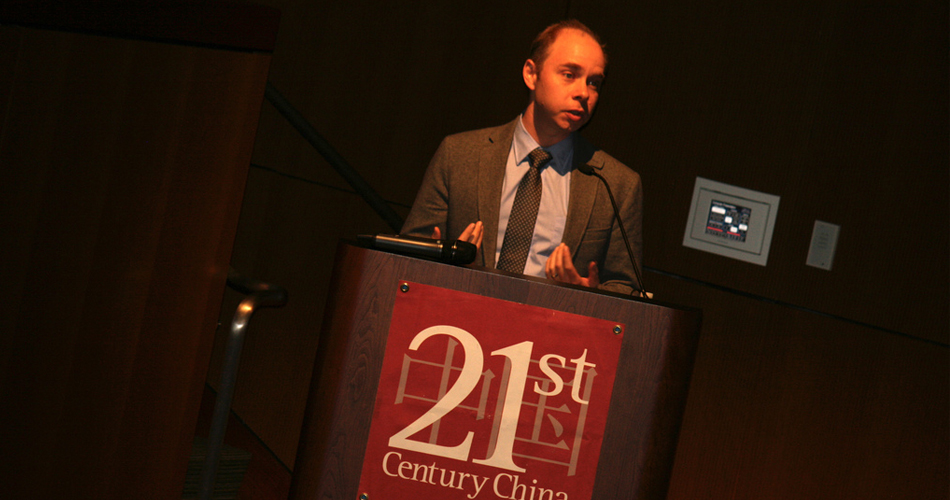 Jeremy Wallace, Assistant Professor of Political Science from Ohio State University, presented an intriguing hypothesis about GDP data from China being manipulated for political gain and promotions.Â  Professor Wallace compares provincial electricity production data to the official provincial GDP growth numbers.Â  Based on research that shows a strong correlation between electricity production and GDP growth rates, Professor Wallace believes that examining electrical output should yield better estimates of China’s GDP growth.Â  His figures demonstrate divergence between Chinese electricity production and GDP data, with an especially wide disparity in 2008 and 2009 (i.e. during the Global Financial Crisis).Â  Professor Wallace is working on not only figuring out if data manipulation occurs, but also if it occurs during critical moments in China's political process.Â  For example, the manipulation problem might be particularly acute right before power transitions, when decisions on who is promoted are made.Â  His hypothesis holds that in years with elite political turnover, the difference between GDP and electrical output will be larger.Â  We at China Focus look forward to following Professor Wallace's work as his research develops.

A version of Professor Wallace’s work can be found: here.

Representatives from the IR/PS student community met with David Hoffman, alum of UCSD and Vice President and Managing Director of the Conference Board’s China Center for Economics and Business in Beijing. He discussed his vast work experience in China and Taiwan, beginning in the 1980s as one of the founders of Yellow River University in Henan Province. Mr. Hoffman also talked about his work in distribution management and technology consulting in Taiwan.  Finally, he described the history of the Conference Board and its mission in China. Founded in 1916 by business leaders, the Conference Board is an NGO that develops reliable economic indicators, including the first consumer price index. The Conference Board’s China Center conducts independent research on China’s business environment and provides peer-to-peer exchanges between international corporations and domestic Chinese companies. Its aim is to produce reliable unbiased economic data for governments and businesses to help them make sound policy and business decisions. Mr.Hoffman concluded by discussing some of the challenges of doing information analysis in China, where statistics can be unreliable and data difficult to ascertain. We hope to provide a full interview with Mr. Hoffman in a future China Focus post. 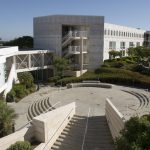