#CFDebate: A Final Gaze into the Battlefield

Almost two weeks have passed since the China Focus Debate came to an end. The curtain fell and the results are in: the Proposition Team led by Prof. Victor Shih was declared the winner, increasing their support rate from pre-debate 25% to an amazing post-debate 51%. However, have we paid too much attention to the debate results and forgot about the details? Not a good idea. (Surely, you cannot pass a course by only sitting in lecture without taking notes and doing homework.) Now it's high-time to review the whimsical arguments, comments, and insightful questions.

The ninety-minute debate started with the Proposition Team's opening statement, in which Prof. Shih first proposed a clear and narrow definition of economic collapse.  By using the term ˜collapse', we imply that China's GDP in real terms will fall to zero or below, or, the Chinese government will be forced to devaluate the RMB by at least 20%,  said Shih.

By using the term ˜collapse', we imply that China's GDP in real terms will fall to zero or below, or, the Chinese government will be forced to devaluate the RMB by at least 20%,  said Shih.

Despite many commentators' optimistic view of China's slowing but steadily positive growth, Shih insisted on arguing that this lucky trend won't last long in the forthcoming years. He pointed out that China's national credit has been increasing much faster than real GDP, and as long as it persists, the central government has no choice but to issue paper money to solve the debt problem. In absence of better alternatives, this policy will inevitably lead to widespread inflation and depreciation of the currency.

Prof. Naughton, leader of the Opposition Team, gave a forceful rebuttal by stressing the strength and resilience of the Chinese economic system. Since the Reform and Opening-up in late 1970s, China has experienced a myriad of challenges, but persisted to grow at an astonishing rate over the last three decades. Over this process, the government and bureaucracy have accumulated good information, resources and expertise to cope with uncertainties in the financial market. The problem of debts, however, is far from irresolvable. So long as China stayed in the right trajectory, it would be erased by increasing government capacity and the greater confidence the Chinese people put in their economy.

Angela Luh from the Proposition Team raised her concerns regarding China's severe investment-consumption imbalance and the relevant difficulties of further reform of the financial market. Once the investment-led growth slows down or shuts-off, the government will be in need of getting more credit to accommodate to this change, of which the worst case could be a deleveraging of the currency. She also postulated that thorough marketization reform could face strong opposition within the strata of political elites, as it affects the rent-seeking opportunities of the inner circle.

Satoshi Nakamura spoke for the Opposition to attack the Proposition team's wrong definition of China's national debts and made a differentiation between total debts  and debts under the name of the government. According to the right statistics, he argued that China's government debts only account for 6% of its annual GDP, which is much lower than US, Britain, Germany, and France. If viewed in a global context, the so-called debt problem  is not exclusive to China but faced by many dynamic economies, said Nakamura.

In the final round, the Proposition Team's Max Esdale Bonner criticized the opponents' blind confidence in China’s economy through a historical perspective. He noted that in China, economic development is always determined by the patterns of politics, a fact you could not deny with ease. What if Beijing cannot give up its obsession with GDP-centered growth model? Or, what would happen if the political leverage of the anti-marketization interests were stronger than the reformers'? History always repeats itself until something new happens,  concluded Bonner.

History always repeats itself until something new happens,  concluded Bonner

Bonner opined that according to this adage, uncertainties in the interaction between politics and economics foreshadows the reform process, rather than boost it.

Wendy Sun from the Opposition refuted that the economic reforms are still in process, and proclaimed their death knell has not rung yet.Â  She admitted that a many of the anachronistic institutions should be removed or renewed in the long run of development, such as the hukou system, which sustains the urban-rural divide and negatively affects the country's urbanization. She also reaffirmed the trust-the-center discourse with glowing pride. We call him [President Xi] Xi Dada (ä¹ å¤§å¤§Uncle Xi). We like him! We have trust and expectations for him and his government,  she said.

We call him [President Xi] Xi Dada (ä¹ å¤§å¤§Uncle Xi). We like him! We have trust and expectations for him and his government,  Sun said.

The Q&A period featured the audience's heightened interests in the arguments and shrewd answers delivered by both teams. In response to a question on why the Chinese government would enact reforms regardless of the opposition’s points, Prof. Naughton responded with the keywords “incentive structure.” It is the change in economic or political environment that presses the government to make adjustments and adopt new policies, he repeated, and those policies in reverse strengthen reform incentives and make the policies institutionalized.

Other questions involved details on certain aspects of the Chinese economy, such as SOE debts (whether they belong to the state or not?) and the distinctiveness of the housing market. A final question led us back to the topic. If there is to be a collapse, will it be economic or political? While the Opposition believed that the adverse effect (which was not collapse  at all) is confined to the economic arena, the Proposition took it further, stating that political pressure will rise once the economic downturn prevails and reduces the government's capacity of repression.

Both teams offered intellectually well-founded and elegant closing statements at the end of the debate. The Opposition refused to accept the correlation between the existing problems and the dark prospect of collapse , and emphasized instead the positive implications in the resilience of China's vast domestic economy, the Xi administration's capacity and commitment, and ongoing legal and institutional reforms. The Proposition, by contrast, highlighted the risks and uncertainties in the global financial market in upcoming years. As the trend of high-powered money inflows into China reverses, recession is an inevitable situation, and there is no better alternative response for the Chinese PBSC except devaluation. Concluded Shih, a sharp decrease in annual GDP growth, say from 7% to zero, was not an unfounded prognosis. 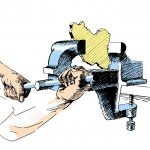 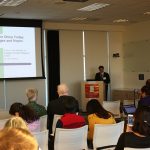