If one had to summarize Xi Jinping’s administration with a single word, what would it be?

“Overreach”, in the metaphorical sense, is the action of striving too far towards lofty goals or ambitions, causing harm to oneself and others in the process.

As China’s economy and political power have soared in the past 20 years, its newfound direction as a global superpower has been contentious to predict and even more contentious to navigate. Nonetheless, Susan Shirk, chair of the 21st Century China Center and former Deputy Assistant Secretary of State for the Clinton Administration, has crafted a thorough analysis of the Xi administration’s trajectory and how the US should respond. Shirk, in her recent talk on her newest book, Overreach: How China Derailed Its Peaceful Rise, argued that the current Xi administration has overstepped its bounds, dragging down China’s economy and igniting international turmoil.

China has employed coercive economic diplomacy, utilizing access to its enormous consumer market as a bargaining tool to force other countries to comply with its political positions, most commonly the injustices in Tibet and Xinjiang. Shirk gave several other examples of China using its economic weight as a bludgeon: the Chinese boycott of South Korean products after the latter installed American military equipment to defend against North Korea, and heavily restricting Australian imports when Australian politicians called for an international investigation into COVID origins. Other questionable diplomatic activities include Beijing’s rapid takeover of Hong Kong’s political rights, the infamous hyper-nationalistic “Wolf Warrior Diplomats” online, and the ambitious Belt and Road Initiative, which has left China still struggling to collect loan payments.

As a result, international backlash–not solely from the US–has been accumulating against China. International defense coalitions, such as the Quadrilateral Security Dialogue composed of the US, India, Japan, and Australia, have begun to form. The EU recently broke off a massive bilateral trade deal that was on the verge of passing, as a result of China sanctioning several members of its legislature. Various international companies and investors have also been decoupling away from China, wary of overreliance on its consumer market.

Shirk also criticized the Xi administration’s overreach in domestic affairs, including economic self-sabotage and state media control. Xi’s sudden 2021 crackdown on private businesses blocked a $34 billion IPO for ANT financial, wiping out billions of dollars of equity. According to Shirk, rather than allowing the market to balance itself naturally, the Chinese government prefers to cripple its own economy to prevent its corporations from gaining their own standing.

Shirk demonstrated Xi’s overreach by utilizing the example of China’s over-adherence to its Zero Covid Policy. Despite the omicron variant’s less deadly but much more contagious effect, the Xi administration has stubbornly refused to alter its policy. The central government has prioritized containment over herd immunity, leading to extreme cases such as the recent 2022 Shanghai lockdown, and refusing to distribute foreign-produced vaccines out of national pride. “Ideological loyalty and commitment are trumping public health,” Shirk concluded, and the average Chinese citizen is paying for it. Shirk further attributes Xi’s nationalism and self-hubris as the root cause of the continuation of Zero Covid Policy,  starting in January 2020, when the outbreak of COVID news made Xi feel vulnerable.

Lastly, Shirk delved into the nature of Xi’s administration: a strong centralized regime with Mao-like elements, coupled with a hierarchy of fear that relies on purges and overcompliance to keep Xi in the center. Shirk argued that Deng Xiaoping viewed Mao’s overconcentration of power as the driver behind grand-scale suffering such as the Great Leap Forward and the Cultural Revolution, and sought to avoid it using inner party restrictions and term limits. However, he failed to set up a proper system of checks and balances outside the party, enabling Xi Jinping to concentrate power decades afterward. Xi Jinping’s “anti-corruption” campaign serves as a systematic purge of his political opposition and intensifies the bureaucracy’s loyalty towards him. Consequently, the lack of opposition leads to an information feedback loop: officials are too afraid to report honestly to their superiors, so dire situations such as the status of COVID lockdowns become greatly mismanaged.

If Xi Jinping wants to convince the US he is sincere in backing down from his overreach, Shirk suggested the best demonstration of sincerity would be to close the camps in Xinjiang. In turn, the U.S. would drop Xinjiang-related sanctions such as cotton, further opening opportunities for mutual dialogue. Other policy options, such as resuming dialogue with Taiwan, are elaborated upon in her book.

Regarding the relationship between China and Russia, and the former’s silence in condemning Russia’s Ukraine invasion, Shirk reiterated there is little chance that Xi would denounce Putin’s actions. As two authoritative leaders condemned by the West, Xi and Putin are relatively close. Xi may possibly criticize Russia if the latter used nuclear weapons, but overall, China will likely remain silent on the issue of Ukraine.

In response to questions probing Xi’s base motivations and China’s international image, Shirk articulated that despite Xi’s overreach, Xi still aspires for China to be respected globally. Xi’s innate goals are to transform China into a global superpower and to maintain his own popular support. The true challenge for Xi, and in turn American diplomacy, is how to allow Xi to pursue his ambitions in a peaceful way, without getting in the way of the interests of other nations.

The Xi administration’s behavior is undoubtedly drastic. China’s aggressiveness towards its neighbors in territorial disputes with frequent military presence, as well as using its enormous market power to impose its political rhetoric internationally, has damaged its global reputation. Nations and international bodies are now moving to decouple themselves or set up protections against China. Domestically, the Chinese government prioritizes its own power in its economy over allowing billion-dollar companies to thrive, crippling profits and employment. Xi Jinping’s Mao-like practices of purging his opponents and eliminating all opposition in the Party has led to a bureaucracy of yes-men hesitant to comprehensively challenge his authority. The ensuing loyalty and adherence to nationalist zeal results in governmental policies being enforced to their extremes, such as the Zero Covid Policy.

Observers of China may be apprehensive witnessing China’s escalating overreach. Shirk’s key advice for US policymakers is that although China may overreach, the US must not similarly overreact.  Likewise, the same philosophy should apply to China watchers. Rapid change and a foray into the unknown naturally bring fear, but by studying China, scholars and political scientists can alleviate such fear by providing knowledge. The ultimate results of Xi’s efforts may only be comprehensively analyzed decades from now, but regardless of that outcome, his overreach in the present day is sending waves across the world.

Michelle is a first-year MCEPA student at the School of Global Policy and Strategy. She graduated from the University of Washington in 2020 with a double major in International Studies and Asian Studies. Her research interests include US-Chinese relations, Chinese international economics, and China’s international public image. 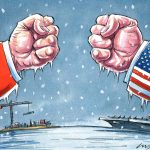