Friend to the State or Foe to the System: China, America, and the Disinformation Wave — 2022 China Focus Essay Contest Winner

The 2022 China Focus Essay Contest English entry winners are William Yuen Yee, who recently graduated from Columbia University, and Natasha Lock, who is a recent graduate of Yenching Academy. Their essays answered timely questions in China and the United States regarding high-tech regulation and disinformation, respectively. China Focus partnered with the UC-Fudan Center on Contemporary China and the 1990 institute to offer each winner $1000! Congratulations to our 2022 winners!

The essay question for the disinformation topic is the following:

Here is the entry from Natasha Lock.

“In the new century, liberty will spread by cell phone and cable modem;” this was Bill Clinton’s prediction in the early 2000s. Clinton and his Washington counterparts could not have foreseen that disinformation, rather than liberty, would become one of the defining byproducts of the internet’s spread. Disinformation deliberately falsifies and manipulates both content and context and, in turn, authenticates fiction. The lines drawn between information and disinformation seem relatively straightforward and binary, but in reality, inferring the difference between the two is becoming an increasingly foggy process for both firms and states.

These blurred lines are visible within the political and social ecosystems of both China and the US, both of which face substantial issues related to disinformation. Some may argue deception, and therefore disinformation, is inherent to politics. A catalyst, however, to the rising global disinformation campaign has been the internet, which has made the spread of false information easier, cheaper, and wider-reaching. This has proven to dangerously influence public opinion. Across the world, alongside the spread of newer forms of internet and social media, we see increasing evidence of individuals, groups, and authorities nationalizing individual feelings through narratives distorted as genuine “information.” Liberty has not spread through technological means as Clinton had predicted — much to the contrary, disinformation, polarization, and suspicion have.

Disinformation isn’t purely the provenance of online scammers and conspiracists. Whether it is Fox News galvanizing the thinking of America’s Trump supporters’ animosity towards the “radical left” or Beijing’s State organ CCTV pushing stories of “Western meddling” in domestic Chinese affairs, such news sources establish fairytale-esque definitive camps of ‘good’ and ‘bad’, rigged with protagonists and antagonists. Emphasizing the “story” at the expense of facts, these narratives are almost always exaggerated and biased to sway public opinion. Analyzing the root, the response, and the result of these disinformation developments in both nations is imperative in order to address some of the wider issues at stake in the two countries’ internal and external contemporary affairs.

The causes of disinformation in both countries stand in stark contrast to one another. On China’s internet, disinformation is the result of authoritarian censorship and a lack of freedom, while for America’s online ecosystem, disinformation is an entwined implication of boundless freedoms. In China, the creation of a sovereign, ordered, and territorial unity is paramount; indeed, for millennia, this has validated strong and centralized rule in China. This overriding concern for chaos guides China’s leadership today and is a prerequisite for the Party’s survival. Domestically, this provides a convenient imprimatur for all types of behavior the Party deems as ‘disorderly’ and paradoxically legitimizes State control over information.

In contrast, for the U.S. and other modern democracies, freedom forms the core in which order then surrounds. Americans generally valorize the First Amendment of the U.S. Constitution as protecting freedom of speech without limits, which eliminates any restrictions on speech — be it genuine information or corrosive disinformation. Anyone prone to mistrusting an election result or a vaccine will hunt out or overvalue corroborating news. For there to be stability in China,  information must be selected; for there to be freedom in the US, information has the right to be shared. In both processes, this leads to an amalgamation of disinformation, albeit from different sources.

Today, China has over 989 million internet users, over 70% of the population are active internet users, and over 94% of juveniles are online. For the Chinese government, regulating the information that is publicly available alongside injecting the Party’s own state narrative leads to disinformation. With near-absolute control over education, the media, and the internet, the CCP can immediately modify the public transcript presented to the people. A digital firewall stands to keep outsiders from interfering and reducing the risk of Chinese citizens organizing or protesting online. Under the firewall, many Western websites are actively blocked — Facebook, Google, the BBC, and YouTube, to name but a few. The scope of these restrictions artificially shapes the types of conversations conducted online. It creates room for state-affiliated websites and news agencies to monopolize media. The Party’s media arteries — CCTV, Xinhua, China Daily, Global Times, and their numerous subsidiaries — feed disinformation and propaganda to a citizenry increasingly cut off from the global web, a far cry from Clinton’s cables of liberty.

Furthermore, China draws on millions of citizens to monitor the internet and influence public opinion online. In May 2020, a BBC investigation found hundreds of fake or hijacked social media accounts promoting pro-China narratives, where some 1,200 accounts targeted people critical of how Beijing was handling the pandemic. Fear also works to hinder the production of what may otherwise have been legitimate information. Chinese journalists are confronted by the expurgating of material or works that deviate from the Party line, consequently encouraging them to form more partisan narratives of global affairs. For example, events ranging from the Tiananmen Square Crackdown of 1989 to crackdowns in China’s autonomous regions remain closely censored or outright restricted online.

In 2021, the United States had over 302 million internet users. Disinformation is rife in American outlets — a byproduct of the democratization of the internet. Indeed, it is difficult to regulate disinformation in the U.S. without igniting debates about infringements on free speech. In America, the lure of the internet stood upon its ability to bypass hierarchical gatekeepers such as governments, publishers, and traditional media. However, following close behind came numerous malevolent actors, from saboteurs abroad to QAnon conspiracists, who manipulated this platform to spread disinformation and hate. They push their disinformation through the colossal internet monopolies — from Facebook to Twitter — who have for years made their billions in value not from showcasing reliable information but on virality, clicks, and engagement.

Then arrived the captain of the disinformation boat. In 2016, newly elected  President Donald Trump’s campaign was rooted in a movement of calling out “fake news” — a term Trump used to describe any news, however legitimate or responsible, with which he found issues. Under Trump, the distinction between information and disinformation was deliberately blurred, sparking serious political ramifications that shook the nation beyond his presidency. The regulators committed to halting Trump’s disinformation campaign came not from higher authorities but instead from the ordinary netizens demanding Twitter deactivate his account. It is beyond imagination that the Chinese people would be able to pressure Weibo into suspending the account of Xi Jinping.

The results of these disinformation campaigns in China and the U.S. take the following forms: in China, it fortifies collective contemporary Chinese nationalism, whilst in the U.S., it has led to hyper-partisan dismissal of truth that has splintered the nation into highly polarized camps across the country.

In China, highlighting the U.S.’s disinformation has strengthened in-group nationalism and exacerbated hostilities, fears, and blame towards external powers — often known by the reductive title of the “meddling West.” International calls to address human rights abuses in Xinjiang have been labeled by the Chinese state as “malicious baseless lies within the U.S. used to humiliate China,” the Party organ China Daily cited the Wuhan lab leak theories as “utter fiction,” and U.S. government accusations that  Moscow requested military aid from China during the Ukraine war were dismissed as “total disinformation.” Internally, media outlets cite Western disinformation as a tool used to undermine both the Chinese State and its people — a narrative that parallels the foreign-orchestrated historical humiliation China has faced since the Opium Wars.

This narrative, formed through merging home-grown disinformation with distracting accusations of Western disinformation campaigns, solidifies China’s in-group mentality against foreign foes criticizing the Chinese Communist Party. Filtered through this CCP-dominated lens, the Chinese population has experienced a relentless torrent of maltreatment and criticism from the West that requires defending. A 2018 Chinese survey found that 90% of the post-1990s cohort expressed resentment over prejudices in the West about China. Cornell University’s Jessica Chen Weiss has observed that young Chinese people today are “more hawkish in their foreign policy beliefs than older generations.” While liberty may not have spread through the internet, patriotism has clearly found fertile soil there in China.

For the U.S., disinformation campaigns have similarly fortified in-group mentalities. In contrast, however, this has not united but rather polarized both citizens’ international outlooks and their domestic views. Millions of Americans started the new decade of 2020 in disarray over the election of Joe Biden. During the pandemic, mask-wearing and vaccines — areas previously primarily of medical concern — mutated into political skirmishes. A June 2018 poll by Axios and Survey Monkey found that 72% of Americans believed that traditional news outlets knowingly reported false or misleading stories at least sometimes. Alongside the rise of online disinformation, faith in traditional media has plummeted.

Where is the inflection point at which disinformation in the U.S. and China ultimately impacts foreign relations between the two powers? When the polarization between two groups reaches the point that each side regards the other as morally or politically intolerable and as an existential threat to their country’s future, international stability is put at risk. Developments over the past decade within both the U.S. and China have been leading us to just such a point. The U.S. has reached a historically divided and negative public opinion on China. Pew Research shows that roughly 90% of U.S. adults consider China to be a competitor or enemy rather than a partner. Rather than being a point of unity, Republicans have long accused the Democrat Party of being too soft on Beijing. Meanwhile, an Economist report noted that Chinese students were increasingly holding more favorable opinions of their own regime alongside less positive ones of democracy and free markets. It is a hate triangle of three actors: China against the U.S., the U.S. against China, and politicians within the US against other politicians within the U.S., whom they claim panda-hug Beijing too tightly. Leading British journalist Gideon Rachman has remarked this as a new form of “hybrid warfare,” where information and opinion are all part of the battle.

Polluted information ecosystems pose long-term challenges to both the U.S. and China. For the U.S., the sheer availability of unregulated platforms to share bottom-up (dis)information prohibits their ability to separate genuine information from disinformation. This is creating a society with increasingly suspicious and polarized views towards any outliers — be it domestic counterparts or foreign foes. Meanwhile, in China, top-down hegemony over information limits, censors, and projects it according to the will of the Communist Party. This expels information that sits contrary to the CCPs interests and endorses other sources and stories that align with the Party. Glimpsed through the average computer screen in Hangzhou or Houston, the world is becoming increasingly fractured into the starkest blacks and whites.

Natasha Lock holds a degree in History, International Relations, and Mandarin Chinese from the University of Exeter. As a Yenching Scholar at Peking University, her work focused on the Party’s use of historical narratives and modern Chinese nationalism. She was awarded Peking University’s prestigious International Graduate of the Year award in 2020. Natasha currently resides in Taipei, where she is conducting field research alongside working in political consultancy. This year, she will join the Lau China Institute of King’s College London to pursue her doctoral studies in Chinese Research. 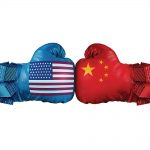 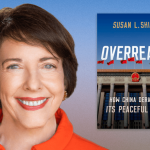