On July 14th, Prime Minister Boris Johnson announced that the United Kingdom would ban Huawei, a Chinese telecom giant, from operating as a 5G supplier in the country. The “5th generation mobile network”, better known as 5G, is meant to be a mobile network with faster internet and increased broadband width than the current 4G model. In other words, it is an upgrade of our current 4G model, an upgrade that several countries have already adopted. Not only did this decision anger China, but it also received sharp criticism from Conservative members of Prime Minister Johnson’s party, since British telecom companies would have until 2027 to remove all Huawei equipment and technology. Previously, several Tory members had demanded that Huawei be removed from the British telecoms network by 2023, but that was perceived to be too soon. London has also decided to stop buying new Huawei equipment after December 31 of this year.

This move comes at a cost of an additional 2 billion British pounds ($2.5 million dollars) to the nation’s 5G implementation and threatens to delay the rollout by two to three years, according to Oliver Dowden, the Secretary of State for Culture, Media, and Sport. Likely implications include British consumers having to wait even longer for 5G to come to the United Kingdom, and the U.K. falling behind its European neighbors that acquire it first.

According to a major Chinese cybersecurity law implemented by the Standing Committee of the National People’s Congress in June 2017, major network operators such as Huawei must store  personal data in China and allow Beijing to periodically check data archives at will. In other words, the Chinese Communist Party would have the ability to view thousands of users’ private information, regardless of whether they are Chinese citizens or foreigners.

The ban is a major about-face, as this past January, Prime Minister Johnson granted Huawei the right to maintain operations in the U.K., albeit in a more limited role. Many perceive the United States’ long-running antipathy towards Huawei to have influenced this decision, considering that the U.S. slapped sanctions on Huawei for being a “threat to national security.” The Trump administration had warned Mr. Johnson that continued cooperation with Huawei could jeopardize British national security.

This May, Washington restricted Huawei’s capacity to produce and acquire American-manufactured semiconductor chips. This prompted the U.K.’s National Security Council to take a second look at Huawei and issue the removal of Huawei technology. This ban comes at an inopportune time for Huawei, which had just received approval to build a massive $1.25 billion research facility in Cambridge. This facility would have undoubtedly created hundreds of jobs and stimulated the local economy. With the increasing hostility to Huawei, the U.K. may decide to cancel the construction of the research facility.

China warned the UK that there will be consequences for “dumping” Huawei, according to Chinese Ambassador to the UK, Liu Xiaoming. Beijing hints that the rash decision will cause Chinese companies–who have kept a close eye on the foreign treatment of Huawei–to rethink investing in the United Kingdom. Hua Chunying, Director-General of China’s Foreign Ministry Information Department, highlighted China’s disdain for the ban and targeted the United States’ role: “Does the UK want to maintain its independent status or be reduced to being a vassal of the United States, be the U.S.’s cat’s paw?” As a Chinese diplomat, her sharp statement is but one indication of diplomacy being edged out amidst the tense U.S.-China relationship. The United Kingdom falls into a precarious position, as taking either side would potentially hold enormous economic consequences.

One concern is the U.K.’s increasing reliance on Chinese imports. About 9% of all goods imported into the UK in 2018, worth around 43 billion British pounds ($54 billion dollars), came from China. Likewise, British companies have invested a substantial amount into China, standing at 16 billion pounds ($20.2 million dollars). However, an aspect that likely factored into the United Kingdom’s final decision on the ban is China’s paltry investment of 1.8 billion pounds in the British economy, compared to the United States’ 592 billion pounds. Unsurprisingly, the U.S. is the single largest investor in the British economy.

Despite all this controversy, it may all be for naught in the end. According to unnamed British government officials, the United Kingdom may choose to revisit the Huawei ban if Trump is not re-elected in November. They also claim that the Huawei ban was partially driven by external US pressure driven by the Trump Administration, and not for economic reasons. If Joe Biden is elected, Beijing would hope that his more moderate tone and willingness to negotiate would indicate less abrupt policy changes and confrontation in the future.

Facing numerous accusations pertaining to the company’s risk to national security, Huawei has decided to go on a charm offensive. The telecom company has curiously announced plans to open three ‘Huawei Experience’ stores in the United Kingdom, days after the Huawei ban was confirmed. With locations in London, Manchester and an undisclosed third location, Huawei looks to build goodwill amongst the British public to demonstrate trustworthiness amidst national security concerns. This may also be Huawei’s strategy to combat the common perception that the Chinese government funded the company’s rise. These new ‘experience’ stores will leave the positive local impact of creating over 100 jobs as well.

While Huawei hesitates to break off business ties in Europe, China is looking to punish Huawei’s European rivals, Nokia and Ericsson, if the EU proceeds to ban Huawei from the continent. The Chinese Ministry of Commerce is considering placing export controls on these companies, which would restrict them from sending products made in China to other countries. This action could severely hamper Nokia and Ericsson’s abilities to tap into the Asian market, while also limiting their effectiveness in the European market.

Despite all of the uproar that this decision has caused, it will be years before this policy takes full effect. With a deadline of 2027, there remains plenty of time for Huawei and the United Kingdom to forge a compromise of sorts. With ever-changing U.S.-China relations, having Huawei come back into the fold of the British 5G network always remains a possibility. However, in order for this to happen, Huawei must take the first step in demonstrating to London and the Western world’s skeptics that the telecom giant is independent from Beijing and makes decisions on a private firm level. If U.S.-China relations continue their downward descent, the path for Huawei to fully return to the United Kingdom becomes narrow. In the end, the Chinese and British government must not lose sight of the other “losers” from the Huawei ban: British and Chinese consumers. 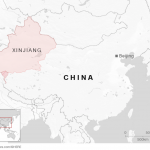 The Plight of Xinjiang’s Uyghurs: A Combination of Foreign Inaction and Chinese Pressure?News, Politics