How Shifting Identity Politics are Shaping the Hong Kong Protests

A group of young protesters rushed to the door of the Hong Kong Legislative Council building and smashed the heavy door with sticks and rocks. Some pro-democracy legislators were crying and pleading for younger protesters not to break in. Claudia Mo, a respected pro-democracy legislator, urged, “don’t rush into legislative council please… or you will be imprisoned for ten years!” The young protesters responded that they were ready to bear all the consequences, even death, and then pushed the legislators away. They broke through the glass doors and once inside they painted the portrait of former President Rita Fan black, then graffitied the slogans of various protests on the walls.

This is a highlight moment of the 2019 Hong Kong protests against the controversial extradition bill. This dramatic moment links Hong Kong’s history and present day, as well as outlines the changes in Hong Kong’s identity politics. In front of the broken glass stood pro-democracy legislators like Claudia Mo and Leung “Long Hair” Kwok-Hung. Some of these once seemingly radical legislators were disqualified in 2017 over an oath-taking controversy. Although they share the values of democracy and liberty with the protesters, their old methods now seem far less radical compared to breaking into the Legislative Council. The issues that concern Hong Kongers are changing as their methods of political expression.

Since the 1989 Tiananmen Square Protest in Beijing, the strengthening of self-identity and the increase in sense of crisis in Hong Kong has only grown. Former radicals like “Long Hair”, although critical of the government, still encouraged Hong Kong people to contribute themselves to the “Protecting Diaoyu Island Movement”, indicating a strong commitment to the idea of “Greater China”. Now, these new developments could lead to more fierce conflicts and add uncertainty to the relationship between Hong Kong and Beijing.

One of the direct triggers of the “Anti-Extradition Bill” protests is a crisis of confidence. In the draft law, it was clearly stipulated that political and religious suspects are excluded, but many Hong Kong people believe that the CCP’s legal system has no credibility, so they declined to accept the interpretation from Beijing and the Hong Kong Government. After experiencing “Article 23 legislation,” “Electoral Reform,” and other political turmoil, Hong Kongers’ concerns about their own security and the differences in political systems between Hong Kong and mainland China have made the identity of “Hong Kong people” even stronger.

Some Hong Kongers believe that since the handover in 1997, mainland China has been eroding Hong Kong’s democracy and liberty as well as depriving Hong Kong of its autonomy which is promised by “One Country, Two Systems.” Beijing’s constant ideological infiltration of Hong Kong and conservative attitudes on universal suffrage in 2014 have caused many Hong Kong people to question the effectiveness and sincerity of “one country, two systems”. This has created a crisis of confidence between Hong Kong and mainland China.

This lack of confidence in the mainland system is linked to a growing sense of Hong Kong identity. Many Hong Kongers firmly believe that China’s step-by-step control of Hong Kong will eventually destroy the identity of Hong Kong people and finally eliminate the particularities of Hong Kong. Therefore, some Hong Kongers—especially the younger generation—increasingly emphasize the identity of “Hong Kong people” and put forth more aggressive slogans and actions. For example, in the wake of the 2014 “Umbrella Movement” when a small number of young radical protesters who held “Hong Kong independence” slogans entered the public eye and sparked heated discussions.

“Hong Kong independence” seems to be an almost indefensible claim. However, if we look more closely at these remarks, it is not difficult to find that in most cases “Hong Kong independence” is only a kind of fierce free speech expression. The true aims of these protesters are almost the same as the traditional pro-democracy Hong Kongers. They are still pursuing the integrity of Hong Kong’s democracy and liberty, and hope that Hong Kong as a cultural “community” is respected, and most of them do not deny that they are Chinese people. The identity of “Hong Kong people” has been strengthened, which has become the new “main theme” in Hong Kong’s political culture – different from the former “main theme” of “democracy & liberty”.

According to a poll conducted by Hong Kong University in June 2019, 76% of Hong Kong citizens regard “Hong Konger” (in a broad sense) as part of their identity, but the percentage of people who take “PRC Citizen”(in broad sense) as one of their identities was only 23%. When it comes to “first identity”, according to the poll, about 53% of Hong Kong people take “Hong Kong people” as their first identity, however the percentage of people who take “Chinese Citizen” as their first identity is only about 11%. This survey can help us see that Hong Kong’s political culture has shifted its focus from mainland China affairs to Hong Kong itself. Under these circumstances, Beijing is increasingly concerned that Hong Kong’s liberal democracy will have a negative impact on China’s national security and political stability.

Beijing’s concerns are not difficult to understand. From the perspective of the central government, it seems that Hong Kong’s sense of autonomy is constantly increasing, and the opposition to mainland China is rising. Beijing uses the development of the economy to build its own regime legitimacy, and China indeed has had great achievements in the course of its economic development. So, a stable environment for such development has become one of the core interests and goals of Beijing. The confidence crisis between Hong Kong and mainland China has made the Beijing government worry that Hong Kong will become a base for undermining its regime. For the sake of regime survival, Beijing will continue to adopt a hardline attitude to deal with the problems in Hong Kong.

This may create a vicious circle of confrontation, that is: in-group love is being converted to out-group hate, which means the psychological distance between identity groups has continuously widened. Some Hong Kong people have used extremely offensive words or even violent means to hurt tourists from mainland China—even if these tourists themselves do not participate in any hostile activities against Hong Kong. These actions also make the mainland Chinese public opinion towards Hong Kongers more alienated.

Meanwhile, with the rise of nationalistic propaganda and the stricter regulation of the internet, especially the cyberspace censorship in mainland China, the public opinion that is allowed to be publicly expressed often has strong nationalistic sentiments and negative valuation of Hong Kong, capitalism, and liberal democracy. Thus making the space for discussion of Hong Kong issues in mainland China increasingly narrow. Such a vicious cycle eventually broke out into new protests this summer. A resolution still seems far away.

The increase in self-identity awareness and sense of crisis on both sides has ultimately led to an escalation of out-group hate and the cost of communication. The problems involved are far more than an “extradition bill”. The bill is not the reason but only one of the expressions of this structural dilemma.

The protest in Hong Kong has already lasted for the whole summer, more than 100 days, and there is no end in sight. At this moment, it is the time to recall the teaching of Martin Luther King, Jr. He told us, “Darkness cannot drive out darkness; only light can do that. Hate cannot drive out hate; only love can do that.” Hate speech and discrimination are not ways out. The long term way to solve the current problem in Hong Kong is to separate ingroup love from outgroup hate and rebuild mutual respect for different political systems and confidence in each other’s communication. The hopeful future should be built on dialogue and empathy, by a young generation with beliefs in tolerance, diversity, and globalization. 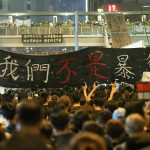