The State of US-China Policy: Three Questions with Jeffrey Bader

Jeffrey A. Bader is a Senior Fellow at the John L. Thornton China Center at the Brookings Institution. A former foreign service officer, Bader had a three-decade long career in the US government and eventually served as Ambassador to Namibia and deputy assistant secretary of state for China, Hong Kong, and Southeast Asia. Bader also served in the Obama Administration as principal advisor to the President on Asian Affairs on the National Security Council.

During a short visit to attend the inaugural UC San Diego Forum on US-China Relations, Mr. Bader sat down with Jack Zhang for China Focus to do a short interview as part of our “Three Questions” series.

This interview is lightly edited for length and clarity.

What is your assessment of the stream of conventional wisdom that US-China relations have been broken for years, that China doesn’t play by the rules or honor its commitments and we need a bully like Trump to shake things up to put the relationship in a new equilibrium?

There are problems in every relationship. If you have no imagination and no diplomatic tools at your disposal, then I suppose every problem will seem insolvable. Then you will have to bluster, threaten, and try to blow things up.

Clearly the relationship with China has entered into a more challenging phase than a few years ago. Most of this is a natural development because China is becoming a more powerful actor in the world. Part of this is due to the US forfeiting its international role under the Trump administration where we retreated to ‘America First’ and we seem to appear to be in the process of systematically dismantling the international multilateral system that we helped create after World War II.

The notion that [China] policy was a failure before Trump—I don’t know quite what that means. During the period of engagement with China under a series of US presidents beginning with Nixon, we have not fought a war in Asia. In the previous half century, we lost around 350,000 people in wars in Asia. I think that’s a pretty substantial accomplishment.

I think that the expansion of trade from practically zero to 700 billion a year that has created many stakeholders on both sides is a pretty big accomplishment.

I think getting China to cease its old habits of proliferation of weapons of mass destruction technology through difficult diplomacy in the 1980s and 1990s was important.

I think getting China’s help to stop Iran’s nuclear program was important as was getting China, Xi Jinping in particular, to work with America on climate change. Situations change, you have to adapt your tools to new situations. But the notion that everything before 2016 was either misguided or naive just strikes me as lacking evidence of any kind.

Looking ahead, what are some scenarios you see for how the US-China trade war is likely to play out?

That depends on calculations by leadership in Washington and in Beijing. The Chinese have been engaged in a number of trade practices that have disadvantaged American companies abroad. These barriers include not recognizing national treatment (i.e. unequal treatment of American firms) in China, subsidies to Chinese companies, theft of intellectual property, forced joint-ventures, and lack of rule of law to properly adjudicate disputes. Many problems that we have been hitting the Chinese very hard on for as long as I have been in government.

Trump is a protectionist, that is his core philosophy to the extent that he has a philosophy. So to initiate a trade war with China came naturally to him. He initiated trade battles with Canada, with Mexico, with India, with the European Union, it’s just that the one with China is bigger. Trump has apparently decided that if he just keeps up the pressure by piling on more and more tariffs, that the damage to the Chinese economy will eventually be so great that the Chinese will cave in.

There are a few problems with that. Number one, that is a miscalculation because the Chinese will not do that. The Chinese leadership will do what they have to do to hold their position because if they surrender to a one-sided agreement, it will be politically catastrophic for them. Secondly, the whole notion of trade wars—we win, you lose in trade—is something that most of the world thought we had transcended with the formation of the GATT and the WTO. Trade is mutually beneficial and the goal should be to make it more mutually beneficial. Trump seems to think that we are paying China when we run a trade deficit. That is the wrong notion.

So how does this play out? Trump isn’t terribly strategic. There seems to be little doubt that he is watching the stock market, he is watching US economic figures, and he is thinking about his reelection prospects in November 2020. Over the coming weeks and months, he will be making calculations as to what is the impact of the trade dispute on GDP growth and his reelection chances. Is it better for me, Donald Trump, to tell workers in the Midwest that I’ve stood firm against China or is it better for me to make a deal and announce that it’s the greatest trade deal in human history?

I doubt that the deal would do very much on economic structure issues, which is nominally the US goal, that’s what US Trade Representative Lighthizer cares most about but I don’t think Trump cares about those goals at all. He cares about the deficit number, so Trump will look for a deal that involves lots of sales of American products to China. Sort of like a buying mission in the old days, and that will be trumped up as a huge accomplishment. But it’s not really a huge accomplishment because, while it is good for particular businesses, in broad economic terms, it doesn’t mean much of anything.

On the Chinese side, I think they’re going to be asking: Is he going to be reelected? Will we have a better deal with his successor? Can the Trump administration be trusted to stick to a deal? Who do we negotiate with? US Trade Representative Lighthizer is the one that matters. He knows the issues, he’s a tough guy. But you have other actors involved on the US side that I think are less important, and then there’s Trump, who mostly trusts Lighthizer but he doesn’t have the same interest in structural issues.

I think the Chinese will insist on the removal of most tariffs. They will ask for the removal of all tariffs but, if I recall, the original $50 billion was tied to specific violations within the intellectual property rights domain. On a legal basis within the United States, there is more of a justification for those. I suspect that the administration will probably fight to keep that $50 billion. The United States will also be looking for an implementation mechanism to make sure that China does what it says it will do, and if it doesn’t do what it says it will do, the US will have the ability to impose snap-back tariffs and tell the Chinese that they can’t retaliate.

You are the author of “Obama and China’s Rise: An Insider’s Account of America’s Asia Strategy.” Looking back, how would you evaluate the legacy of the pivot or re-balance to Asia? What was the biggest obstacle preventing the vision behind the pivot from being implemented in full?

It’s hard to have legacies in the United States when you have new administrations that come in and throw out everything that preceded them. This president has a profoundly different attitude towards the region, towards alliances, towards partnerships, towards the relationship with China. So I think one can’t say there has been that much carry over with this administration. However, I would say that, below Trump, within the administration there has been hard and effective work with alliances, particularly with Japan and Australia, which was started under President Obama.

The obstacles have mostly to do with resources. What resources are you going to put towards this new effort? You can always increase your military presence cause the military has got a lot of money and counterparts are interested in US military cooperation. You can do a lot of process and symbolic things, like we joined the East Asian Summit. We ramped up our relationship with ASEAN, and we built a strategic partnership with Indonesia because President Obama has a special relationship with Indonesia. We played a more active role in South China Sea issues beginning in 2010. We took a number of steps to modernize alliances with South Korea and with Japan and stood shoulder to shoulder with South Korea during a very tense period of relations with North Korea when boats were being sunk and islands were being shelled. So on the security and political side, pretty good.

On the economic side, pretty weak. And that is a function of resources and the US Congress’ unwillingness to commit resources to foreign policy because there were so many competing issues domestically. So we didn’t have much to offer, we had virtually nothing to offer that was of a public character on the economic side. We had the US-Korea Free Trade Agreement (KORUS) and free trade agreements are useful and good. But the business community tends to be less impressed by free trade than government people. We started the process of joining the Trans-Pacific Partnership (TPP), which Trump of course immediately killed. 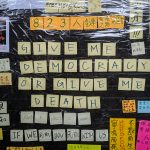