Carl Minzner is a Professor of Law at Fordham University specializing in Chinese Law and Governance. His recently published book, End of an Era: How China’s Authoritarian Revival is Undermining its Rise (Oxford University Press, 2018) examines how the end of China’s reform era creates new risks for its internal stability. Some of his previous academic work includes China After the Reform Era, in the Journal of Democracy (2015). He has served as Senior Counsel for the Congressional-Executive Commission on China, International Affairs Fellow for the Council on Foreign Relations, and Yale-China Legal Education Fellow at the Xibei Institute of Politics and Law in Xi’an, China.

During a short visit to UCSD to describe his work studying China’s authoritarian revival, Mr. Minzner sat down with China Focus for a short interview as part of our “Three Questions” series.

How has China’s perspective on its neighbors changed from reform era to post-reform era?

I think the main shift in China is not so much in respect towards any individual country, but just the mentality of being more assertive, more willing to push to consolidate its interests. During the reform era, the emphasis was internal, focusing on economic reform over everything else. The thought was, “we need to tamp down tension with our neighbors to give space for reform.” Of course, you see that mentality has vastly shifted now. The new emphasis is that Chinese sovereignty and Chinese interests will be upheld even if it results in conflict with their neighbors. That includes Japan, Taiwan and so forth. I think this new lens can be applied aptly for China to all its neighbors.

Now, it’s not that China even in the reform era wasn’t interested in consolidating these interests, but that they just weren’t that technologically capable. Looking at the South China Sea, for example, it’s not that they weren’t interested before in upholding the claim, it’s just that they didn’t have the ships capable to do so, which now they do. I think this will be the dominating trend going forward for China, this newfound assertiveness.

What do you think is the biggest misconception, if any, that U.S. decision makers have on China? And vice versa?

The big misconception that worries me now is that we tend to think of China as a monolith, forgetting how varied and diverse the country actually is. Sometimes this thinking can lead to a lot of problems. In the Maoist era, you would see people assume all Chinese to be hard-bitten communists who could never accept capitalism. In the reform era, it was almost the opposite. People thought that all Chinese wanted to go into small business. Chinese students were all going abroad, buying Gucci bags, and clearly China would be the next democratic society. But people forget that China is big, and the Party exists. Today in the post-reform era we see a sort of flip-back. Now everyone thinks that, Xi Jinping is the absolute ruler, that China will conquer the world. We forget how much is boiling under the surface.

There is a sort of romanticization of the reform era, how liberalizing it was. But keep in mind that back in 2005, there was already this tightening of control. Unlike what many people here in the United States think, it’s not Xi. It’s the institution itself. The Party itself is fundamentally unwilling to continue political reform as a result of Tian’anmen. The buildup of the security apparatus, the control of the media and academia had already begun and it’s just a step-by-step backward movement.

As for China looking at the United States, I think that everyone tends to look at other societies in their own eyes. I think there’s real difficulty in China looking at the political system in the United States. For the Chinese elites that make the big decisions, there is an expectation that there is someone on top of the system that should makes things happen here [in the United States]. They are frustrated since they think it should be Trump, but it’s not the case. You end up having all this different pressure and backlash. For the elites, they thought they understood what Nixon did, what Clinton did. It’s hard for them to understand who’s running the show, and not just for Chinese. Even for us, we don’t know either who’s running the show.

How does the economy play a role in this transition? Is the slow-down of the Chinese economy causing this new authoritarian government? Or is it the other way around?

Some of the things are just secular. You look at other countries that had a big economic boom and slowdown, like Japan and South Korea which had tremendous secular recalibrations. There may be aspects of the Chinese political system that are amplifying the economic situation. They are trying to keep things going, providing heavy stimulus, worrying about unemployment rate. They really need to do things to create jobs.

My suspicion that is there is rebound effect in the political erosion that we are seeing. In the 1980s and 1990s, China had opportunity to build alternative institutions. The Party membership ranged from 80-90 million people, and they were a diverse group of people. A lot of senior leadership at the time recognized that if you gave all the power to a select few party bosses, bad things happen like abuse of power and corruption. Party leaders themselves don’t want riots or unrest. They introduced reforms like village elections, intra-party democracy; all of them aimed at giving some level of voice to the people and a check on power.

The problem is that people started to actually use them. The people start to go forward to organically develop and change the way the system is run, and the Party center is not comfortable with that. Hence they suppressed it, and rolled back many of these reforms. Now you see the Party trying to resolve domestic challenges, such as how to tackle corruption: they politicize the anti-corruption campaign, strengthen party leadership, and re-centralize power. That is one of the dynamics taking place right now. 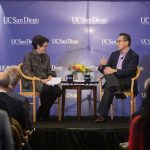