The Geopolitics of Shenyang’s Koreatown

At first glance, the aromas of bulgogi barbeque and sounds of K-pop blasting from karaoke bars make Xita Street seem like any other Koreatown. But Xita Street in the northeastern Chinese city of Shenyang is unique as one of the largest communities of Koreans from both the North and the South.

Only 200 kilometers from the North Korean border, Xita Street became a hub for businesses catering to Korean tastes during the booming economic growth of the 2000s. Every night, the street came alive as Koreans from both sides of the border were free to mix and mingle with each other, and restaurants and entertainment venues flourished. However, the fortunes of one small neighborhood have waxed and waned with the volatile geopolitical atmosphere of Northeast Asia.

In September 2016, North Korea conducted its sixth and largest nuclear test at an underground site less than 90 kilometers from the Chinese border, triggering a magnitude-6.3 earthquake felt in Northeast China. People in Shenyang worried that radiation would leak and drift northward. Social media criticized the North Korean test, signaling a paradigm shift among Chinese who increasingly regard North Korea as a threat rather than an ally. Since then, North Korean restaurants became less popular, with restaurant staff sitting idle and familiar customers staying at home or going elsewhere to eat.

It wasn’t just empty restaurants. A week after the test, China voted in the UN Security Council to tighten sanctions on North Korea. As a result, North Korean trading companies on Xita Street shut down. For North Korean business owners in Shenyang, the winter seemed much colder than usual.

Not only did this hurt local restaurants and shops from fewer visitors, but also South Korean-owned tour agencies in Xita Street, which cater to Chinese tourists. Even today, relations with South Korea haven’t fully recovered. Lotte, the Korean brand most affected by protests is reportedly shuttering its operations in China.

Yet there are signs that Xita Street’s fortunes are rising again. Last year, North Korea sent twenty-two athletes to the Pyeongchang Winter Olympic Games. Having already met twice with Donald Trump, Kim Jong-un has announced his intention to denuclearize the peninsula and sign a peace treaty with President Moon. The collapse of the Hanoi summit last week has thrown the negotiation process into doubt, but the US and South Korean decision to end their biggest annual joint military drills suggests that Trump hopes to keep talks alive. Much remains uncertain, but the prospect of improved relations in Northeast Asia brings hope that Xita Street will prosper once more.

Buyuan (Mikey) Zhang is a Master of International Affairs candidate at the School of Global Policy and Strategy (GPS) at the University of California, San Diego, specializing in international politics and international development and non-profit management with a focus on China. His hometown is Shenyang, China. 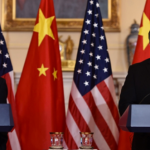 Charting the Course for US-China RelationsPolitics