On the Cusp of a New Cold War

Last October, a bombshell report by Bloomberg News alleged that China had carried out an economic espionage operation of historic proportions, successfully infiltrating the supply chains of over two dozen American companies — including Apple and Amazon — by implanting microchips the the size of a pencil tip and thus compromising thousands of company servers. Despite the report’s heavy sourcing, several of the named companies, including Apple and Amazon, issued comprehensive, vehement denials of the story, with Apple C.E.O. Tim Cook even demanding that Bloomberg retract the story.

While the merits of the Bloomberg story remain hotly contested, the report nevertheless marks the latest in a long list of various security concerns America has had about China’s technological capabilities. After curtailing hacking because of a 2015 agreement with the Obama Administration, China has again ramped up its hacking program targeting American intellectual property, with the U.S. Department of Justice recently indicting 10 Chinese nationals for conducting economic espionage on behalf China’s Ministry of State Security. The October indictments come just weeks after the Department of Homeland warned against hacking group cloudhopper, which has been linked to the Chinese government.

These increased fears of China’s technological capabilities reflect a fundamental truth about the evolving nature of the US-China relationship: that the United States, intimidated and frightened by China’s dramatically increasing technological prowess, stands on the edge of a new cold war. It isn’t just the increased cyber espionage- facing new spheres of conflict, including a trade war and a technological arms race in AI and quantum computing, the US has mistakenly chosen to focus on de-linking the industrial and economic ties that bind it with China over other courses of action that would be less adversarial and more productive.

Since much of the strength of the American military has rested on its technological dominance, China’s frenzied investments into the technologies of the future has forced the United States to work to keep its competitive edge. This is particularly true of the burgeoning field of artificial intelligence, where China has finally come close to surpassing the United States; last year, China’s investment in A.I. exceeded that of the United States and it produces more academic publications on A.I. than the US does. The latter is especially concerning considering that Chinese academic research into A.I. is often expected to have weaponized applications with the practice of civil-military integration. Currently, China is using artificial intelligence to beef up its military, creating increasingly autonomous vehicles suitable for a variety of terrains. Superiority in weaponized A.I. would also greatly bolster the Chinese capability for cyber warfare, enabling their military to better identify weaknesses and exploit vulnerabilities in any system they choose to target. Beyond artificial intelligence, China is also exploring new frontiers in other key technologies of the future.

In the last few years, China has taken great strides in developing quantum science, a cutting edge field of computing that replaces the classical computing method of encoding information into binary digits (bits) of either 0 or 1 and instead encodes both 0 and 1 simultaneously into quantum digits(qubits). Several of the most notables advances in quantum technology have come from China, as the country recently set a new record for quantum entanglement, hosted the first video call with quantum encryption, launched the first quantum satellite and plans to build the world’s biggest quantum research center.

Quantum technology has broad implications for security, many of which could imperil the United States’ position as the foremost military power in the world. As Elsa B. Kania writes for the Center for a New American Security, China’s advances in quantum computing could “offset key pillars of U.S. military power,” or even “[leapfrog] traditional U.S. military-technological advantages,” granting the Chinese military significant advantages, such as being able to decode the encrypted communications of other militaries, while protecting their own sensitive information beyond decryption or utilizing quantum radar technologies to detect American stealth technologies. With these technological advances making China increasingly capable of posing a security challenge to the United States, the two find themselves increasingly combative and competitive. Their security relationship was further embittered last year, when General Joe Dunford, the chairman of the Joint Chiefs of Staff went to Beijing to try to forge a better military relationship, but discovered that an aide’s tablet had been maliciously tampered with after it had been left in a hotel room, leaving the U.S. military establishment even more wary of getting close to China.

Distrustful and intimated of an increasingly nimble and technologically capable China, the Trump administration has responded primarily by launching a trade war, both a misguided attempt to decrease the deficit and also a shot at slowing down the Chinese economy enough to make a dent in the coffers that fund China’s technological growth. While defending the trade war, President Trump has specifically pointed to Beijing’s “Made in China 2025” initiative, a plan to further industrialize and ensure that China will be the tech superpower in the next few years. “Made in China 2025” isn’t the only use of Chinese technology that has Washington concerned — the administration often refers to the forced transfer of technology and theft of intellectual property China carries out to drive its technological growth. Recently, the administration has even signaled an intent to significantly de-couple the American and Chinese economies, a dramatic move that will severely hurt both economies and force allies (particularly in Asia) to pick between the U.S. and China, a situation that will benefit neither country.

While concerns about Chinese espionage and intellectual theft are legitimate, imposing hundreds of billions of dollars of tariffs and adopting a hostile attitude towards China isn’t the right response to China’s broadly increased technological capabilities. Instead, there are several steps that the United States can alternatively take to step away from the brink of cold war with China and play to our strengths as a country.

Firstly, we should work directly with China to curtail hacking and intellectual theft, as the Obama administration successfully negotiated in 2015. More contentious issues should be mediated through international channels. Our issues with China regarding market access, trade, and industrial policy, for example, should be brought to light and litigated in the same international institutions, such as the World Trade Organization, that we’ve spent decades building precisely for scenarios like these. Instead of overt economic aggression, we should engage in careful, measured response to incidents of Chinese overreach. Stumbling blindly into trade war alleviates none of these concerns.

Secondly, we should be focusing on coordinating and responding to China with our allies. Countries across the world do not trust China and instead look at the United States for leadership. Over the last few decades, the United States has built an incredible, formidable network of alliances, with over 60 treaty allies across the globe. China, by contrast, only has North Korea as an ally. Our alliance network of industrialized, generally democratic countries can help the United States prod China into respecting the same norms of trade that the international system is based upon. We should exercise these substantive alliances that we’ve formed; instead of antagonizing and alienating our allies, we should be strengthening our bonds and increasing coordination.

Third, the United States can keep its overall dominance in technology by welcoming talent from all over the globe. Instead of pushing Chinese students away through visa restrictions on students, we should be welcoming Chinese talent and reassuring the world that the United States isn’t hostile to international students or the Chinese people at large. Students all around the world still desperately want to live and study in universities in America, not China. By further opening our doors to the next generation of top engineers, scholars, and scientists and keeping them here, we can ensure that future scientific breakthroughs will happen here and not abroad.

Nobody wins a trade war and neither America nor China want a cold war. Instead of the Trump’s administration paranoid and heavy-handed strategies, the United States should respond to China’s technological growth by engaging in a clear-eyed and level-headed approach that respects our values and focuses on improving ourselves as a country instead of endless punitive measures chasing a nebulous, undefined goal. Working in tandem with our allies through the international order, we can step away from cold war and work with China to ensure shared productivity, development, and prosperity. 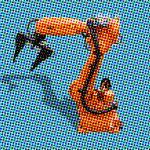