Susan Shirk is research professor and chair of the 21st Century China Center at the School, and one of the most influential experts working on U.S.-China relations and Chinese politics.  Her storied career includes a stint as deputy assistant secretary of state (1997-2000) responsible for U.S. policy toward China, Taiwan, Hong Kong and Mongolia.  She also founded and continues to lead the Northeast Asia Cooperation Dialogue, an unofficial forum for discussions of security issues.  Her book “China: Fragile Superpower” helped frame the policy debate on China policy in the U.S. and other countries.  Her most recent book “Changing Media, Changing China” was published in 2010.

She recently co-chaired the Task Force on U.S.-China Policy, organized by the 21st Century China Center at UC San Diego's School of Global Policy and Strategy and Asia Society's Center on U.S.-China Relations, to formulate and discuss expert recommendations for the Trump administration.  This interview follows on the heels of the Task Force's report launch at UCSD on February 13, 2013.

Q1. What was the impetus and process for forming the Task Force on U.S.-China Policy?

The reason I wanted to create this task force was that I myself was confused in my own mind about how our approach to China should be adjusted.  We’ve had the same basic approach since Nixon — we call it engagement from a position of strength in Asia. Some people call it engagement plus a hedge, but we don't like that term. Anyway it was sort of obvious to me that it wasn't working as well as it had been in previous years, especially after 2008 and the global financial crisis.

But in my own mind I was confused because I thought in some ways we should be firmer and stand up to China, and insist that our interests be better preserved in the relationship — say on our economic relationships and the treatment of our firms. But then in other areas I thought maybe we need to accommodate China more. For example, from our position in Asia, it would be unreasonable for China to rise and not have more influence than when it was a poor and developing country. The question is what the reasonable way to accommodate China is. And I certainly didn’t think it would be reasonable to say, Ok, China now you’re very powerful, we're going to withdraw from Asia.  Asia's yours, you can recreate the Middle Kingdom system.  That would really be very poor not just for our interests but for all of our allies and friends in the region who want us there to preserve some balance with China.

But on the other hand we have to reassure China that we're not trying to contain or keep it weak, and that our goal should not be maintaining American dominance in Asia. The goal should be peace and stability in the region. And that is really what our interest is. Not being number one. So it's a really complex challenge: should we get firmer? Should we get softer? And how do we combine those things? So I thought the best way for me to sort out my own thinking was to gather together the China experts I most respect.  Especially the people who've served in government, to put them all in a room and be honest with what's worked in the past and what’s worked less well in the past, and learn from those lessons to figure out where we going from here.

QII. You bring up the challenge of finding the right balance between pushing back too hard and being too accommodating in U.S. foreign policy towards China.  What are your thoughts on how well the Obama administration handled this challenge?  And it may be too early to say, but how do you think the Trump administration will handle it?

I think the Obama administration basically did a pretty good job. They tried to engage effectively with China but they had a difficult time because it was a period in our economic relationship when China's top-down industrial policy turned into a more mercantilist and protectionist economic approach, to the detriment of foreign firms after decades of really welcoming them. It was a period when China's actions in the South China Sea were really quite provocative and it was a tough thing to figure out how to respond–things like cyber hacking of commercial secrets and the Senkaku/Diaoyu islands dispute.

So the Obama administration had a difficult time, but they did start to make some important adjustments in our overall approach and get firmer. From time to time they would threaten to take some costly actions as in the case of cyber hacking and it worked. So I think they did a pretty good job.

I think they didn't handle the South China Sea well — our report is critical of that. Instead of being neutral on the claims themselves we would always criticize what China was doing but never criticize what any other claimant did. But other claimants have built artificial islands, structures — they've even built military installations.  But our messaging was really biased. And the other area where I felt the Obama administration erred was having all the South China Sea messaging being done by the military. Where was our diplomacy? So if you're sitting in China and you're observing U.S. actions, it really looks like the U.S. is using South China Sea issues to contain China. And I know people in China who normally are very positive about the U.S. but on this issue they really think that the U.S. is biased and using South China Sea issues to put excessive pressure on China. So what that says to me is we didn't communicate very well what our true intention was.

QIIB. Your work on China has focused on how internal and domestic politics can influence foreign policy, driving those policy decisions in unintended directions.  It's interesting you mention the military's influence over U.S. messaging on the South China Sea.  There's also an argument that perhaps the entrenched People's Liberation Army (PLA) has been more responsible for Chinese policy in the South China Sea than actual diplomatic leadership.

I think actually if you look at how the South China Sea became a focal point of domestic nationalism in China in around 2007-08, it was not just the PLA navy, it was all these other bureaucracies, including fishing, marine surveillance, and Hainan island. And they all used the protection of sovereignty claims in order to gain bigger budgets for themselves and enhance their bureaucratic influence.

So they'd go out there and they make a big show of pushing off fishing people from other countries or reinforcing sovereignty claims over some land features. And they'd bring the TV cameras and journalists with them and before you know it the South China Sea became a focal point of popular nationalism.  But it hadn't been before about 2007.  You don't find much discussion of it.  So I think it was these bureaucratic interests coupled with weak leadership under Hu Jintao with nobody restraining these policies that aggravated the problem in the South China Sea for China.

QIII. One of the difficulties of trying to influence policy from the position of an academic or think tank, for example, is that you send out a report to policy makers and it goes into this black box and it's hard to tell what effect it has.  What do you think about the Trump administration's reception of the report? Do you think there are people open to its recommendations?

We briefed a couple of the senior-level political appointees in the Trump administration who are going to be dealing with China.  There certainly was an interest and some receptivity, and of course two days later, the President carried out one of the main recommendations of our report about reaffirming the One China Policy.   Now I'm not going to claim credit for that, I'm sure we just added to the drumbeat that he should do that.  But in addition, we went to the Pentagon and the State Department.  We also had very good discussions with some of the senators on the Senate Committee on Foreign Relations.

We're going to continue to interact with officials in Washington, but we don't have any illusions that we have provided a very concrete road map for policy in the Trump administration.  They're going to make their own choices.  But what we hope is that we provide a sound foundation for well-informed analysis and some very concrete, specific recommendations for a public debate on China policy.

graduated from Grinnell College and studies international economics at GPS, with a regional focus on Japan and Southeast Asia. Â His research interests focus on energy security and geopolitics in the Asia-Pacific. Â He has 2.5 years of professional and academic experience abroad in China, Taiwan, Japan, and Korea. Â As a Robertson Foundation for Government fellow, Sammy is committed to a career in federal government and international affairs. 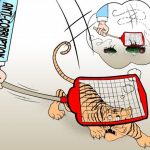 The Origins of Chinese Crony CapitalismPolitics 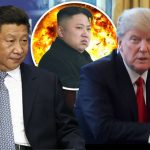 Old and New Minds: The evolving relations of North Korea, China and the USPolitics