China Focus is pleased to bring you the inaugural Oxford-style Debate on China. The motion is that: The house believes that the Chinese economy will collapse in 5 years. 

The debate will be in the Oxford Union style. The Forms of Debate are similar to those used in the British House of Commons. Participants will be assigned to one of two teams of three or four speakers each, including two to three student speakers lead by one professor on each team.Â  One team will be championing the proposition (defending the motion) and one representing the opposition (arguing against the motion). For a demonstration of Oxford Union style debate, watch this video.

After the debate there will be a 30-minÂ  ˜floor debate' when anyone from the audience may ask a question to either team.Â  Questions will be asked via Twitter.Â  Members of the audience without access to Twitter will be allowed to ask a question with pencil and paper.Â  The secretary will field the questions. Speakers on either team can also use this time to direct questions at the other team. Both teams are allotted a 2 minute time right of reply to be used anytime during the floor debate. After the floor debate concludes, audience members will vote to decide the winner of the debate.

Interventions may be made during the course of a speech, whereby another speaker interrupts by saying on a point of information . Such interventions should be kept short and to the point; and a speaker is not obliged to accept the intervention. The organizers will do our best to keep the debate to roughly one hour. The dress code for the debaters will be business formal and we encourage spectators to come dress smart as well.

As the audience enters Robinson Auditorium, one door will be labeled ˜proposition' and the other ˜opposition'. Audience members are encouraged to enter through the door that best reflects their own stance on the motion. Ushers will count the number of members who enter through each door at the open and close of debate. The winning team is the one that sways the most votes.Â  Several IR/PS Alumni Association Clubs may be participating in the voting as well, via live stream. Results will be announced the next day on https://chinafocus.ucsd.edu/

Professor Victor Shih will be captain of the proposition team. Professor Shih received his doctorate in Government from Harvard University, where he researched banking sector reform in China. He is the author of “Factions and Finance in China: Elite Conflict and Inflation,” which is about the linkages between elite politics and banking policies in China. He is also the author of numerous journal articles and a frequent adviser on the banking industry in China.

Professor Barry Naughton will be captain of the opposition team. Professor Naughton is an authority on the Chinese economy, with an emphasis on issues relating to industry, trade, finance, and China’s transition to a market economy. He is the author of numerous books and articles including Growing Out of the Plan: Chinese Economic Reform, 1978-1993 (1996) and The Chinese Economy (2007). He received his doctorate in Economics at Yale University.

No prior experience with debate is necessary to participate. We hope to assemble a diverse set of student speakers and encourage all UCSD students to apply. Please see this as an opportunity to work closely with two of the nation's leading China experts and a chance to learn more about the topic of debate. We encourage those students interested in participating in the debate to apply by sending an email to China Focus <irpschinafocus@gmail.com> with the following information by Wednesday October 1.

We will screen your applications and notify you of your team assignment by Monday October 6. Once selected, we encourage you to meet as a team, research the topic thoroughly, and develop a case in consultation with the team captains. Since there are multiple rounds of debate, we encourage each team to think strategically about the order of speakers and about where the team captain should be in the rotation.

Please RSVP to the following Eventbrite to attend the event:

You can also RSVP to the link: http://www.eventbrite.com/e/end-of-the-chinese-economic-miracle-tickets-13185964575Â

Choose between attending the live event at the IR/PS Robinson Auditorium, or to attend one of the live streaming parties being hosted in Boston, Washington DC, or the Bay Area.

We hope you join us for this groundbreaking event at UCSD and IR/PS! 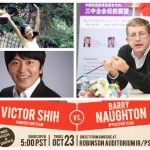