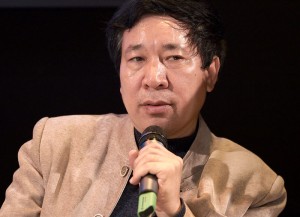 Yan Lianke is a renowned Chinese writer who writes about the greed and corruption that is a part of the human condition. Although his fictional stories ring true, the censors do not always appreciate his tuning fork. His first novel, The Sun Goes Down, was banned in 1994, as was his most popular Serve the People. While his straight-to-the-point screeds sometimes get him into trouble, there are beautiful and poignant messages interlaced with his vivid re-imaginings of true-to-life stories. On April 8th, Mr. Yan came to USCD as part of the 21st Century China Program’s Spring Lecture series and gave a talk to a crowd of spirited listeners.

Early on in the night, Mr. Yan won over the crowd with high praise for San Diego. Chinese people do not know where heaven is, but today I know heaven's last stop is in San Diego. 

Chinese people do not know where heaven is, but today I know heaven's last stop is in San Diego. 

He also said that if he moves one more time in his life, it would definitely be to San Diego. Mr. Yan spoke on three main topics during his talk: Revolution, Money, and Death.

Mr. Yan first discussed revolution. He mused that ever since the 1911 Xinhai Revolution that overthrew the Qing Dynasty, China has been in revolution every day. Especially after 1949, the world recognizes the great number of revolutions in China, a myriad of quakes through its social fabric. Revolution brought China a new kind of beneficial socialism, but it also brought tremendous disasters. 

Mr.Yan brought up the Great Leap Forward that brought three years of natural disasters. He wove a tale of woe where, in the late 1950s, China tried to catch up with the West by mobilizing people to industrialize in three years. The aim was to increase iron and steel production to surpass the great western powers. Villagers were asked to produce 10,000 kilos on roughly one acre of land. Mr. Yan described how Mao Zedong, Deng Xiaoping, and Zhou Enlai built a furnace in the backyard of Beijing's CCP headquarters; the result was three years of natural disasters. No official numbers exist for how many people died during the long period of starvation, but research from the U.S., the UK, and Hong Kong indicates between 30 to 40 million people died.Â  As Yan pointed out, this is the equivalent of the entire populations of Singapore or Taiwan. He also told a story from his memories as a child during the Cultural Revolution. When he was 5 or 6 years old, his mother brought him to a piece of land and told him the soil was edible. She said that if revolution came again and he had to eat, he could eat this land, bark, some wild grass, but to avoid the rest. This he says is his most significant memory about revolution.
Mr.Yan ruminated that even when China opened, the political and economic reforms all came about as forms of revolution. He believes that China's current problems with unemployment, housing, education, and the economy are all problems caused by revolution. A few years ago, he experienced land seizure and forced relocation from his old apartment in Beijing and observed his community attempting to fight it. One official told him: This wasn't demolition, this was revolution. You are a national cadre, you too should support revolution. 

This sentiment is what drove him to write the novella Serve the People.

Yan Lianke also discussed the prevalence of money in Chinese society, and how it has replaced religion. He stated that thirty years ago, people didn't have religion, but they believed in the Communist Party. Now, after decades of reform, people in China would not dare to say they don't like the Chinese Communist Party, but they do not believe in Communism. He opined that Chinese people need a spiritual life, but they live in a vacuum. “We can't find belief, we can't find spirit, but we found money. “

He described his home village devoid of trees after years of illegal logging by people in search for money. He then told the story of a banquet he was invited to by a wealthy real estate developer, who ordered a 12,000 RMB meal for three people. He asked the developer why waste so much money on one meal? The developer replied that if he only spent 900 RMB, he is just a local landlord, but spend 12,000 RMB, then he is a tycoon. If he spent only 100 RMB, then people would think he is stingy. Yan Lianke concludes that in China everyone worships money, rich or poor. It's now China's spiritual life.

Yan Lianke discussed the AIDS epidemic in China and how he came to write Dream of Ding Village. No one is sure exactly how many people die of AIDS in China, and Yan Lianke believes the government is not entirely sure either. Back in 2002, he received a letter that alerted him to the widespread number of AIDS patients in Henan, his home province. He told the story of a 30-year-old man and an 8-year-old child he was put in touch with who had contracted HIV by selling their blood, as they had been encouraged to do so under a sanctioned government policy. After the SARS epidemic hit, he went to a village of 800 people, where 41 had died in one year of AIDS. He spent time there to observe the lives of the AIDS patients, who were isolated and were not allowed to eat with their families. The village was barricaded off, and suffered from food shortages. According to Mr.Yan, the severity of the situation was hidden by buying women to marry AIDS patients, which included virtually all 35 to 45-year-old males. None of these patients were able to work.
Initially the local government tried to hide the reality by diagnosing the villagers with liver disease instead, as they were only allowed a quota of 10 AIDS diagnoses per day. Due to the social opprobrium people suffered who were diagnosed, patients often hid their status. However, during the Lunar New Year, Yan Lianke said they were able to discover that 210 people in the village had AIDS by offering red envelopes (traditional new year gifts of money) of 100 RMB to every AIDS patient who stepped forward. Yan concluded that now the government does provide better treatment to villagers than they had, which is why he wrote the book. However, he says the real life situation was worse than the fictional telling. He tried to get the novel published by making it more sentimental, but it was still banned in China only three days after publication.

In his concluding remarks, Yan Lianke says he has confidence in China, but that he also feels despair. It is still a developing country with lots of stories to be told. He says China moved from a Communist utopia into a capitalist one, and that they want a heavenly life like in the U.S., but with China's population, the world would collapse if everyone in China lived like an American. He quipped that not only are there not enough natural resources, but there isn't even enough fresh air. He says now in Beijing and Shanghai you are considered to have a rich life if you can breathe fresh air.

During the Q&A session, many Chinese students in the audience criticized Mr.Yan for his harsh criticism of China and exposing its darker elements. Mr.Yan quipped that CCTV reports on one kind of truth, and he reports another. Combined, people will get a better picture of what the truth really is. He says he writes what he knows, and that since he isn't an American and doesn't know it in depth, he can't really criticize it from only having a superficial understanding of it. However, much like Luxun, thought to be the greatest writer in Chinese modern history, Mr.Yan says that because he really loves China, he also hates it, and thus he criticizes it. Certainly don't believe everything I say, but definitely don't believe everything CCTV says either.  (CCTV is the central government-run TV company in China)

Mr. Yan says he feels lucky because now, as a man in his fifties, he is free to write whatever he wants. He claims he has grown more courageous with age, but his works prove his truth has always been indomitable. Yan Lianke comes off as Christopher Hitchens crossed with George Carlin, a well-informed acerbic uncle who has seen things that would make your own eyes peel. We are fortunate to have his truth in the form of fiction.

To see or buy any of Yan Lianke’s books, go here. 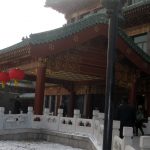 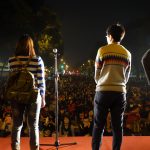